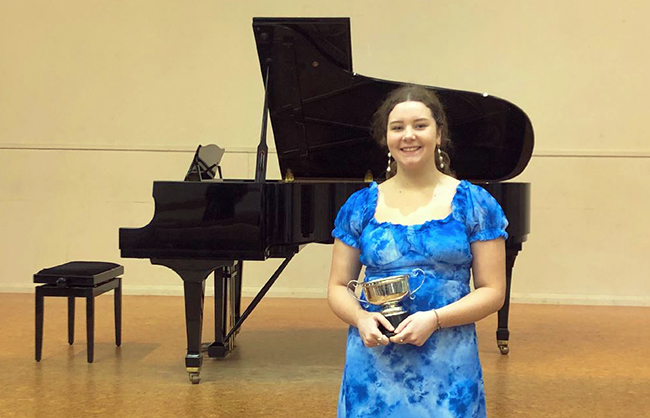 Lillian with award at the 2019 Dunedin Senior Vocal Competition.

The 18-year-old, who is majoring in Geography and Sociology and studying a Music minor in classical voice, auditioned for the choir last November. She has since attended her first workshop in Wellington and will join other members of a core Voices team in Auckland for a performance of Faure’s Requiem in April.

The normal joining age for the Voices is 25 years’ and up, but music director Dr Karen Grylls recognised that the choir would benefit from Lillian’s vocal skills, she says.

The talented soprano has also been accepted into the New Zealand Youth Choir, which is New Zealand’s national choir for ages 18 to 25 years. In 2019, Lillian was appointed the local Dunedin RSA choral scholar and she regularly sings with the choir during the year.

Lillian grew up in Dunedin and says her life has been “filled with fantastic choral and singing experiences from an early age.”

“My parents noticed my concentration on music and an early ability to sing in tune and learn music as soon as I heard it. I was encouraged to participate in a number of local choirs, have vocal lessons and undertake music exams. To now be given the chance to sing with both national choirs at the same time is both exciting and a little bit daunting”, she says.

Lillian’s hard work was recognised with distinctions in all her singing grades from grade 1 to grade 8. She also enjoys playing piano, flute and guitar.

In 2011, Lillian gained a scholarship to study and sing with the Exeter Cathedral Choir in the UK and for three years sang with the Cathedral Choir at services several times each week while attending the music-focused school attached to the 13th century cathedral.

She returned to Dunedin in 2014 and joined local church choirs as well as the choirs of St Hilda’s Collegiate School. With the school’s choirs she regularly attended the national Big Sing choral competitions. Throughout high school, and more recently, Lillian competed in many solo singing competitions, winning more than 25 individual awards.

Since 2015, Lillian has participated actively in the Dunedin and Otago musical communities, by taking minor performance and chorus roles in productions for Opera Otago, Otago University’s pre-tertiary programme and school productions. In 2015, Lillian also began a four-year stint with the New Zealand Secondary Students’ Choir, after auditioning for a place with over 250 other hopefuls.

During her time with the NZSSC, she went on numerous national and international tours, and training courses and concerts.

“That wonderful choral experience led to many new friendships and my skills increased so I was in a good space to audition for the next level of choirs.”

In January 2019 Lillian attended the New Zealand Singing School and was awarded the Mainstream Classical Vocal Award. During 2018 and 2019 she was able to share some of her growing musical knowledge when she became a vocal tutor for primary school children at the Saturday Morning Music Classes, which allowed her to put into practice all that she has so far benefitted from, and help the next generation of choristers.

“It’s not all singing though, I’m really enjoying my Geography and Sociology studies, and juggling part-time work and other commitments with my day-to-day singing engagement schedule keeps me busy.”

Lillian wanted to study classical voice at Otago because she was a Dunedin-local, and had enjoyed tuition from now-retired classical voice teacher Associate Professor Judy Bellingham throughout secondary school and at 100 and 200-level. 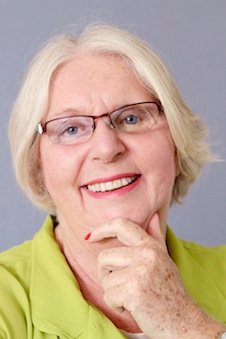 “During my final year at St Hilda’s Judy suggested that I complete a certificate of proficiency in Classical Voice, so that is what first drew me into studying at Otago. I am a Dunedin local and my mother works for the University as an Associate Professor [in the Sociology, Gender Studies and Criminology and Social and Community Work programmes], so those factors also contributed to my decision.

“Judy encouraged me to participate in solo competitions and to audition for the New Zealand Secondary Schools Choir, which was an experience that deepened my love for choral singing. She helped me grow so much as a performer and as a person, developed my love for solo singing, and with my confidence on stage and off. As cheesy as it sounds, I do not know if I would be where I am without her.”

This year Lillian has Dr Tessa Romano as a singing teacher.

“Although I have only been with her for a short time, I have learnt a lot of new things about performing from Tessa and am very excited to see how this year goes.”

Lillian is also extremely grateful for the support and guidance offered by Music programme faculty members Professor Terence Dennis and Tom McGrath, and for their help with learning music and accompanying her during several performances.

Lillian is unsure of the direction her future studies may take, but hopes to do master’s studies in the UK, as she is a UK citizen and has family there.

“I’d really like to pursue a career in music, however I haven’t shut off the idea of doing something in Geography or Sociology, as those are subjects I am passionate about too.”