Pharmacology and Toxicology research project for Hands-On at Otago

What is Hands on Otago?

What is the Pharmacology and Toxicology research project?

Title: Would you take a nootropic drug?

Would you take a nootropic drug that was originally designed to treat people with Alzheimer’s disease? A nootropic drug that would enhance your memory, your concentration, and your intelligence, thus reducing the time required for study? Or is this a form of academic cheating - similar to athletes that abuse steroids? Furthermore, would you still take this nootropic drug if long-term use was associated with liver damage or increased levels of anxiety? Come along and find out. In addition, you will learn how a legal over the counter nootropic drug enhances your memory, your concentration, and perhaps even your intelligence.

Want will I do?

Cocaine, cannabis, ecstasy. We’ve all heard of them before (perhaps more than we should), but do we really know what is behind the ‘adrenaline rush’, the highs, the energy boosts? This is why we were at the Pharmacology and Toxicology Department this week: to learn the intricacy, the complexity, the interference such drugs, poisons and antidotes have on our brain functions at a smaller than microscopic level. Well, there is more to drugs than just what gives you the high, and we investigated the investigations of pharmacologists, this process otherwise known as drug development. A painstaking process it may seem, for it takes 20 years to get a drug (the helpful type) from the lab to the shelf! You may wonder who would want to work from 8am to 8pm playing around with rats in swimming pools (just to name one of the many stages in drug development), but we soon realised how important these people behind our medicines are. I’m sure we all want our grandmother to be able to make her own cup of coffee for as long as possible (just so we can focus on study). For a quick overview, the pedantic drug development process begins with drug screening, then pre-clinical research, clinical trials (phase I, II, and III), regulatory approval, and finally post-marketing surveillance.

The human brain consists of just under 100 billion neurons. Neurons are specialised cells that pass electrical signals resulting in the release of chemicals. This is why each person is unique and is able to remember specific scenes. Perhaps using our brains to store the new information about our brains was a little bit difficult, but us in the pharmacology project learnt it the fun way by playing the roles of vesicles, dopamine, dopamine receptors, dopamine transporters, adenosine, adenosine receptors, and the awesome caffeine. Just as a taster, dopamine (the chemical that makes you happy) binds to the dopamine receptor (which is connected to adenosine receptors) activating the neuron, but this bond is then broken when the nasty adenosine blocks dopamine from binding. Now the neuron is no longer activated. A little complicated, but I guess the caffeine (see below) kicked in to block the adenosine from binding to its receptor (activating the neuron again), and we got this process sussed in our head.

Mon-Thurs: The Clinical trial – Is caffeine really worth drinking?

Our aim was to carry out a clinical trial to investigate the effects of a frequently used nootropic drug, caffeine. Nootropic drugs enhance memory and intelligence. Does coffee really make us smarter? Are there any side effects we should be aware of before we take our daily dose?

We decided to take this mission into our own hands, beginning with us each blindly gulping a can of either V Pocket Rocket (120mg caffeine), Sprite Zero (placebo), or caffeinated Sprite Zero (120mg caffeine). Over the three days we took each of the drinks without knowing which was which. It was a randomized, double blind, placebo clinical trial to ensure the reliability of our data. However, we could not just rely on our own feelings and energy to draw a conclusion as to the effects of caffeine. We needed to investigate the deeper effects using the following physiological parameters:

We had some fun with ‘computer games’ to measure our reaction time, spatial working memory and intelligence/object reasoning. We also put on a stethoscope (just like a real doctor) and sphygmomanometer on our partner’s upper arm, and while listening to the ‘ba-boom ba-boom’ we measured their systolic and diastolic blood pressure. Tremor was evaluated with tremor indicator apparatus, and anxiety with a questionnaire, backed up with the more accurate cortisol saliva assay- your spit never lies!

Cortisol is released by the adrenal glands to mediate the effects of anxiety, and so using a salivary immunoassay kit (while noting that the kit’s control cortisol turns yellow after reacting with sulfuric acid, and hence the darker the yellow the higher the concentration of the control cortisol, and therefore less of the body’s own cortisol and lower anxiety levels), we had a measure of our anxiety in 25 microlitres (0.025ml) of spit!

Our results were really, really exciting. With big breath... caffeine did not significantly alter the reaction times, spatial working memory, intelligenece, blood pressure, heart rate, tremor nor … drum roll please … our saliva cortisol levels. We can conclude from our results that caffeine is not worth a cup of coffee.

Preclinical research – Would Compound G1, G2, and G3 be worth taking?

A drug able to cure grandmother of her dementia is all very well, but have we forgotten something? While ensuring the effectiveness of the drug there are other important measures vital to the well-being of our patients. And here the pre-clinical stage came into clearer detail. We were to determine whether three compounds (G1, G2, and G3) caused liver or kidney toxicity. We got to play around with the fancy pharmacology equipment - cuvettes, vortex, and spectrophotometers, while in accordance with several new lab techniques, and followed a rather complex process to investigate the amounts of creatinine and ALT (alanine aminotransferase) in our three nootropic compounds. This tested for kidney and liver toxicity, respectively. We pipetted our way to determine that Compound G1 caused kidney toxicity. We sure wouldn’t want this damage after just curing grandma from her dementia using Compound G1!

Indeed a busy week for us at the Pharmacology Department. But it is a first hand experience of real life science that we have all relished and grown with. Not to mention the great fun and many laughs we have had, at our novice pipetting attempts and playful pharmacology staff with their cockledoodledooing-stuffed toy roosters. Thank-you Cath, Simran and Irene for bearing with us, patiently teaching us so much of what we couldn’t have learnt elsewhere, and sharing your passion in the field that we have learnt is certainly crucial in our society today. Because of you and Hands On Science, we have plenty to take back with us to school and schoolmates, and into our futures in science. We will forever be grateful and will always treasure the memories and knowledge we have gained together as the now closely knit 20 ‘Pharmacology Cats’. 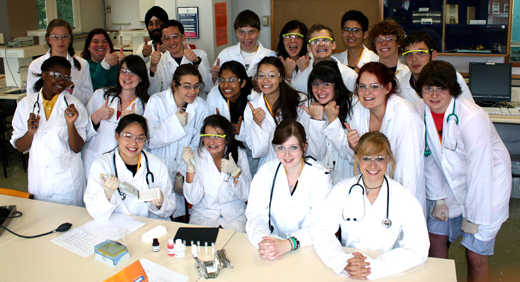 Click here for other outreach activities that the department participate in. 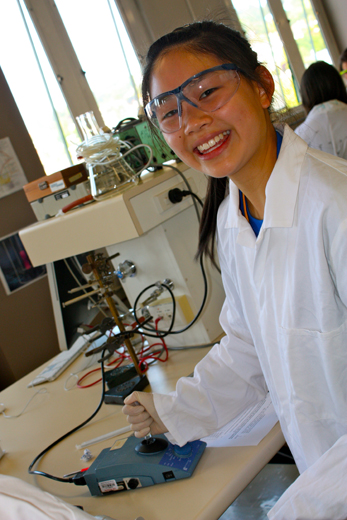