Augmented reality: an education tool for the future 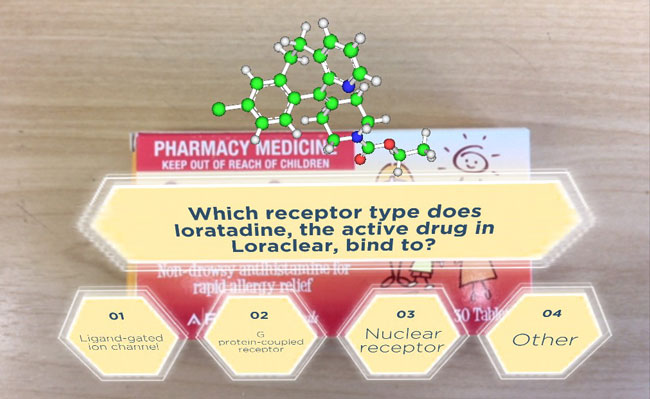 The Department of Pharmacology and Toxicology has developed an app that allows students to aim their mobile device at a range of over-the-counter medicines to see the drug’s three-dimensional chemical structure.

The University of Otago has come up with a clever new learning tool using augmented reality technology that could be a world-first.

The Department of Pharmacology and Toxicology has developed an app that allows students to aim their mobile device at a range of over-the-counter medicines like Panadol to see the drug’s three-dimensional chemical structure.

The drug’s molecular information is produced simply by scanning the packet of the non-prescription drug using a mobile phone or tablet loaded with the free app, named Morpheus. A three-dimensional chemical structure pops up on-screen, overlaid on the real-world view of the packet, and students rotate and explore that drug’s active chemical makeup in three-dimensional space.

Morpheus also reproduces lecture material, all via mobile devices outside the classroom.

The prototype app was funded by a University of Otago Teaching Development Grant awarded to Drs Belinda Cridge and Catherine Gliddon. The pair have been working with the University’s Higher Education Development Centre (HEDC), which undertakes research into contemporary issues in higher education.

One Fat Sheep, a New Zealand/Australian digital solution agency (also University of Otago graduates) designed the mobile app, and Associate Professor Joel Tyndall from the School of Pharmacy provided the digital files for the chemical structures.

Drs Gliddon and Cridge, both as passionate about education as they are about pharmacology and toxicology, are excited that this is one of the first times tertiary teaching has employed augmented reality. “It’s particularly exciting that Morpheus is exploiting technology that students are now familiar with, such as the Pokémon Go game, for completely new purposes.”

Dr Cridge said while the chemical structures of drugs are essential information “building blocks” for many different studies, traditional course information is often dry, and there is a lot of detail to take in, particularly for first-year health science students.

Morpheus is centred around lecture material taught by Dr Gliddon to a first-year biochemistry class (BICO 192) of over 1,500 students.

She said the problem with teaching receptor theory is that students cannot visualise the drug binding to the receptor under the microscope. The development team therefore incorporated animations of the underlying theory in the app to aid students’ understanding.

“Morpheus has been purposely designed to connect the lecture material to a real world situation such as drugs available to the New Zealand public on a supermarket shelf,” Dr Gliddon said.

The first stage of the project was developing a prototype app, which was demonstrated to BICO192 students earlier this month to establish if it works as planned. Based on student feedback, Morpheus will then be further developed.

Dr Gliddon said the beauty about the Teaching Development Grant and working with the HEDC is the chance to see if augmented reality aids students’ understanding, given there is little research on whether augmented reality apps can be used to educate.

If students engage and it does prove a useful learning tool, it’s likely this will be the first of many augmented reality teaching resources.

“Obviously, we can add more drugs into the next generation app, but we can also look at its potential for things like 3D body imaging to see the drug circulating,” Dr Cridge said.

The frameworks and formats established to produce the app have effectively been a blueprint that paves the way for further applications; the potential beyond this into other teaching areas is enormous. “The sky is the limit.”

What the students think

Health Sciences student Alexander Woolrych enjoyed using the just-developed Morpheus app on his mobile after his biochemistry lecture, and has already tried scanning a range of medicine packages in stores.
He says the strength of using augmented reality is the 3D structure of the drugs.

Given it’s only just been released and given to students to trial, he says he’s impressed with how polished it looks and how smoothly it works, and he’s looking forward to there being more medicines and targeted study information added as the app is refined.

“Learning in this manner provides incentive to leave studying in a traditional manner and have a different learning experience. I'm sure this will benefit students with certain learning styles, as it will give them an alternative to other methods that they might have difficulty with.”

Having said that, he says right now most students are used to and prefer more conventional learning, so while its cool, he predicts augmented reality teaching won’t completely replace other methods in the immediate future.