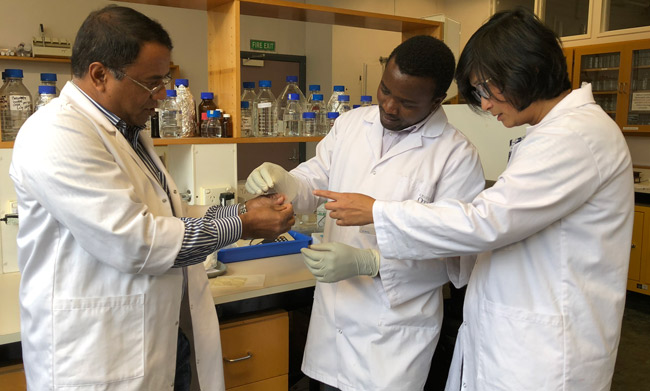 Some of last year's Toxicology Grant recipients (from left) Associate Professor Azam Ali, PhD student Stephen Giteru and Professor Indrawati Oey of Food Science with the edible film they have developed and are testing for toxicity using the grant.

A research project in Otago’s Department of Food Science has the potential to solve the global environmental issue of plastic packaging.

The project, led by Professor Indrawati Oey, was one of four recipients of Toxicology Research Grants last year. A second round of grants opens today.

Plastic packaging is easy and cheap to create, and difficult to decompose, Professor Oey says, making the development of low cost biodegradable and edible packaging a global priority.

"This toxicology test is a crucial step before we use it either for food or feed."

Her lab is working on a potential alternative using zein and chitosan (which are by-products of corn and seafood industries, respectively) and poly-vinyl alcohol (PVA) (a water soluble polymer which is commonly used as an additive for food, pharmaceutical and cosmetic applications).

They have been working to blend zein, chitosan and PVA to create a film with good mechanical and barrier properties, and at a low cost, which could eventually become an alternative for petroleum-based plastic packaging materials.

The project is at the “proof of concept” stage, Professor Oey says. They applied for a Toxicology Grant to investigate the toxicity of the films.

“This toxicology test is a crucial step before we use it either for food or feed,” Professor Oey says. “This grant also allows us to establish a new collaboration with the Department of Pharmacology and Toxicology and AgResearch.”

“The funding is sufficient to cover our expenses,” she says. “It also opens up prospects for growth and future collaboration/partnerships in the interdisciplinary field.”

The edible film project is also supported by the Riddet Institute, a New Zealand Centre of Research Excellence, funded by the Tertiary Education Commission. This project is led by Professor Oey, together with PhD student Stephen Giteru, Associate Professor Azam Ali, also of Food Science, Dr Belinda Cridge of Pharmacology and Toxicology and Dr Eric Altermann of AgResearch.

About the Toxicology Grants: 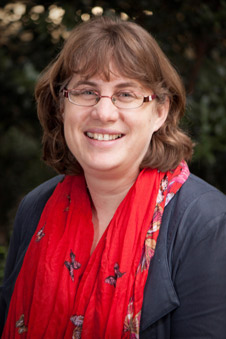 The Department of Pharmacology and Toxicology offered research grants in toxicology for the first time last year, hoping to increase the breadth of research happening under the toxicology banner at Otago.

While small (up to $10,000) the grants are enough to kick-start an idea or collaboration, Dr Belinda Cridge says.

“Ideally we would like small projects worth up to $5,000,” she says. “We don't expect a great deal in terms of outcomes, but it’s a small pot of money to try something different.”

The department was awarded funds from the Division of Health Sciences and the School of Biomedical Sciences to support the grants.

“We got such a great response from people last year, and have found some really exciting new projects,” she says. “So we wanted to open it up again to people that might have missed it last time.”

Dr Cridge says Otago has a great research reputation and many international students want to come here to learn more about how New Zealand is protecting its natural environments from chemicals and other toxins – but they need projects for these students.

"What a lot of researchers don't realise is the work they are currently doing will often have a toxicological angle."

“There are a number of great opportunities for researchers and students in the discipline and there is a lack of toxicological expertise across the Australasian area, so we think that Otago is the ideal place to be a worldwide centre of toxicology expertise. We just have to build on what we already have and bring researchers together.”

She says the grants are a way of getting new collaborations to form across the University and with outside agencies.

“We have been working on building relationships with the Environmental Protection Agency, the Institute of Environmental Science and Research, National Institute of Water and Atmospheric Research, Ministry of Primary Industries, District Councils and a whole range of others so we are happy to put people in touch with a range of outside organisations if they want to explore opportunities.

“What a lot of researchers don't realise is the work they are currently doing will often have a toxicological angle. Toxicology is the study of poisons and everything is poisonous if taken the wrong way or at the wrong amount, so the possibilities are endless. What we want to do is to encourage people to use the inter-disciplinary framework of toxicology to generate new collaborations and ideas, and so we use a very wide definition of toxicology.”