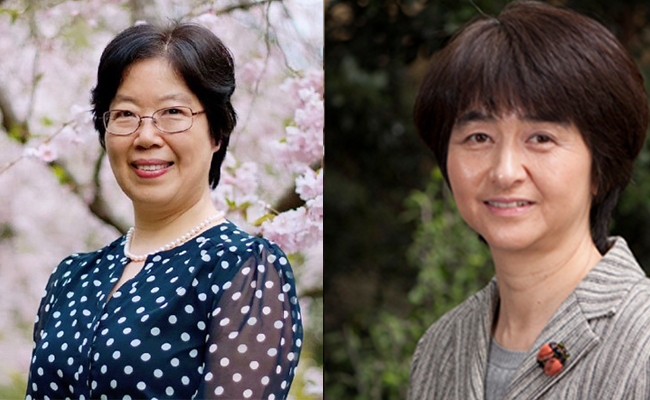 Growth is a natural part of the learning experience at the University of Otago but add in the challenge of speaking an entirely different language and that experience is magnified.

Associate Professor Yiwen Zheng, of the Department of Pharmacology and Toxicology, shares how she came to the University of Otago in 1992 after her husband arrived the year before her to begin his PhD research.

With a four-year-old daughter at the time, she was hoping to continue her studies, having graduated from the Shanghai Medical University (now a part of Fudan University), and so she began what would become a two-decade long career in research.

“For the last 20 years or so, I have been focusing on an auditory condition called tinnitus to figure out the mechanisms behind what causes this as well as potential treatments for it,” Associate Professor Zheng says. “We’ve generated more than 90 publications over the years and our research is internationally recognised and so it’s a great feeling to be contributing to such good work.”

It wasn’t easy though. Upon her arrival in New Zealand, she realised that the English spoken in Aotearoa was unlike that of the English she had been taught.

“Back in China, I had learnt English in high school and University and so I was under the impression that my English was pretty good until I got here,” Associate Professor Zheng says.

“When I arrived at the airport on the first of April in 1992, I was shocked at how mistaken I was and it felt like a terrible April Fool’s Day joke.  “Though now, having recently passed my 30-year anniversary in the country, I feel proud to know how far my family and I have come.”

She also shared words of support for other multilingual staff and students, encouraging them to get involved in the community as soon as possible both through working and making friends.

She herself found a research assistant position as soon as she could and was grateful to the staff in the Department of Pharmacology and Toxicology who were patient with her English-speaking at the time.

“Even though my English was broken, I tried every day to talk to people and the people around me were so nice and patient to listen,” Associate Professor Zheng says. “For young people who might not have English as their first language, I would encourage you to be brave and talk to people because isolating yourself away from the language limits your chance to learn it and then, in about three months or so, you’ll have the basics down.”

Based in the Department of Anatomy, Professor Ping Liu had worked as a geriatric physician in China for eight years before moving to New Zealand to join her husband who had studied here.

She quickly realised the many challenges that came with the English/Chinese language barrier which made it difficult to continue practicing medicine and so she took the opportunity to reframe her career and become a researcher.

“That decision led me to starting my PhD in 1995 in the Department of Psychology and under the supervision of Professor David Bilkey; I investigated the contribution of the perirhinal cortex to spatial learning and fortunately, my PhD thesis was accepted with no revision,” Professor Liu says. “I really struggled with English at the start of my PhD. I relied on using a dictionary all the time when completing my reading. I wasn’t able to communicate well with people verbally and my writing was a sort of Chinese-English, rather than New Zealand-English.”

She also shared her experience of being invited to a potluck dinner, not long after she started her PhD, with the invitation stating ’please bring a plate ‘, and so she brought an empty plate, rather than a plate of food.

At the time she was extremely embarrassed, but it encouraged her to push herself and speedup the language and cultural learning process.

“I would spend many hours reading the Otago Daily Times, watching English films, and reading the news aloud for half-an-hour. I even found a favourite English film, a classic one called Roman Holiday, with Audrey Hepburn starring in it, and I must have watched it more than ten times,” Professor Liu says.

Now, several years later, Professor Liu has been able to leverage her background in medicine and her PhD to work at the interface between the laboratory, diagnostic and therapeutic interventions. Currently, she is researching arginine, a semi-essential amino acid, and this research has implicated the alterations of brain arginine metabolism in the process of normal aging and in the pathogenesis of Alzheimer’s disease and schizophrenia.

Her research group is currently exploring the potential use of blood and/or cerebrospinal fluid biomarkers centred on arginine metabolism for the clinical diagnosis and prognosis of both diseases.

“The group is also exploring the preventive and/or therapeutic strategies for offspring with prenatal exposure to viral infection; topical research given that the COVID-19 pandemic has resulted in more than 500 million infections worldwide, including in pregnant women,” Professor Liu says.

Having gone on this journey, she hopes that her story can inspire students who may be going through similar difficulties when communicating in English because language is an “essential tool” to get through “the boundless and exciting sea of learning” that they have ahead.

How the Bachelor of Pharmaceutical Sciences is putting multiculturalism into practice

The University of Otago has also taken steps to be inclusive of multilingualism through the introduction of its one-of-a-kind Bachelor of Pharmaceutical Sciences which opened to students for the first time this year.

This degree not only encompasses a broad range of scientific disciplines critical to the discovery and development of new drugs and therapies but will be open to a cohort of international students from Chengdu University of Traditional Medicine in China.

These students will be invited to complete one and a half years of study in their own country before coming to New Zealand to complete their final two years of study at the Dunedin campus.
This agreement between the two Universities was brought about as a result of their existing relationship, which includes collaborative research on the modernisation of traditional medicines.