Research at the Pharmacology and Toxicology Department

State-of-the-art technologies, including the use of in-vivo disease models, are used to undertake integrative, cellular and molecular investigations aimed at understanding animal and human pathophysiology (and to delineate targets for novel drugs).

In 2017 we launched the first funding round for projects related to toxicology. We received a great deal of interest and awarded four grants to researchers from across the University.

Investigation into the stability of the acid metabolites of recent generation synthetic cannabinoids.

Cytochrome P450 gene expression as a biomarker for exposure to environmental toxins.

The 2019 funding round is now open. For information and application forms, please email: tox.admin@otago.ac.nz

Academic and research-support staff of the Department are engaged in high quality, internationally-recognised research focussed on the following themes:

Individual laboratory groups are as follows:

Research is funded by international and national research organisations such as:

Individual researchers within the Department maintain strong collaborative links with other Departments within the University and laboratories in all five continents. 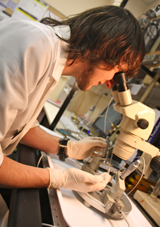