A brief history of pharmacy at Otago

University level pharmacy education began in Otago in 1960 with the first student enrolling in 1962 and the first pharmacy-specific papers introduced in 1963. The inception of pharmacy at Otago was the result of considerable support and lobbying by the (then) Pharmacy Board in the 1940s and ‘50s. The impetus was to move away from the apprenticeship model to a scientifically rigorous pharmacy programme. This became the first 4 year degree programme to be offered in Australasia or the UK. At the same time a 2 (later 3) year diploma course was established at the Central Institute of Technology (then at Petone and later to move to Heretaunga). Both programmes incorporated an intern model of education where the first 4 (or 3 years for CIT) were spent on campus in a tertiary education setting, and the final year was an internship run through the Pharmaceutical Society. This same model is currently used today, some 50 years later. CIT was later to close in the early 1990s after the government decided that all pharmacists should hold a university degree.

Pharmacy at Otago was initially located within Medicine in the Department of Pharmacology and Pharmacy under the leadership of Associate Professor Fred Fastier.  In 1970 Pharmacy moved to the Faculty of Science and assumed the mantle of an independent department. This saw Pharmacy cement its strong science basis and the pharmaceutical sciences were well developed. Internationally pharmacy education, however, was changing with the introduction of Clinical Pharmacy. The Department was to return to Medicine (now the Division of Health Sciences) and embrace a more patient focused style of programme. By the mid-1980s the Department was offering a programme that balanced science and practice, with a stronger influence on clinical pharmacy. This also saw the introduction of postgraduate clinical programmes of study, one of the first distance taught professional programmes offered at the University. It was not until the 2000s that Social Pharmacy would emerge from pharmacy practice as a separate and very important research based discipline for the School. The 1990s saw the Department be recast as a School and the head become the first Dean of Pharmacy, a role taken on by Professor Peter Coville. Importantly in the late 1990s and moving on to the 2000s the School embraced the ethos change proposed by the University, to strive for excellence in research and to become a research led School. From 1996 to 2010 the research outputs of the School have increased more than 5 fold.

The contemporary School is one that balances research excellence and research-informed, professionally oriented education with its commitment to health care in New Zealand. The School now holds a position in the top 10 PBRF performers within the University. 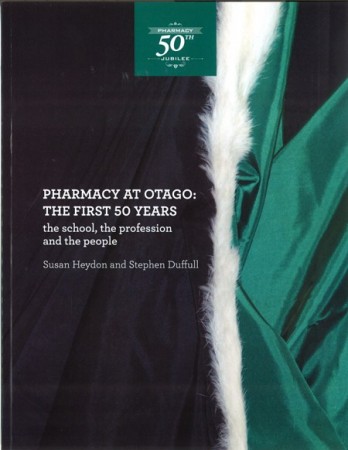 A book written for the School of Pharmacy's 50th Jubilee, Pharmacy at Otago: The first 50 Years by Dr Susan Heydon and Professor Stephen Duffull, is available through the School reception.

Dr Sue Heydon, the School of Pharmacy's in-house historian, is willing to discuss any history questions and queries. Dr Heydon's research topic is History of pharmacy education in New Zealand.