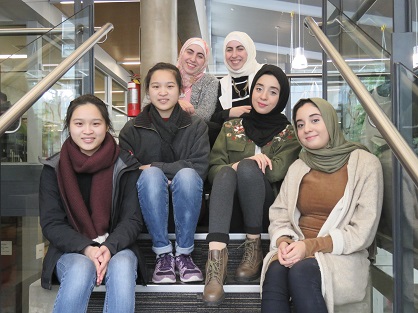 The school’s associate dean academic, Natalie Medlicott, who has had a long association with admissions into the Bachelor of Pharmacy degree programme, says it is highly unusual to have three sets of twins in one academic year. It is believed to be the first time this has occurred at the school.

Otago University School of Pharmacy staff could be forgiven for doing a double take - not once, not twice, but three times this year with three sets of twins beginning their pharmacy studies.

The P2 students hail from all parts of the globe. Wala and Weam Edwik (22) are from Libya, Qiaoyue and Yingyue Wu (20) from China and Nadeen and Dareen Saleem (21) from Syria.

Sadly, war forced Nadeen and Dareen from their home country. Raised in Syria’s capital, Damascus, the twins had enjoyed growing up in peaceful times however, the civil war in Syria changed all of that and their parents felt it was no longer safe for them to live there.
They moved to Dunedin three years ago and say life in the university city is a far cry from what they had come to experience in Damascus in recent years. “There were explosions and bombshells everywhere, it was quite dangerous,” Dareen explains.

Their entire family including their parents, Mohamad Saleem and May Taha – who worked as a gynaecologist and pharmacist respectively in Damascus – and older siblings, Yasmin (25) and Ahmad (23) all immigrated to New Zealand.

While the twins had learnt some English during secondary school, Dareen says they could not speak the language very well when they first arrived in the country and it was difficult to fit in at first.
However, they participated in the university’s Foundation Year and made friends, which they say made the transition into the Kiwi way of life much easier.

While Dareen was initially interested in working in any health field, Nadeen became particularly interested in pharmacy while attending pharmacology lectures in her biochemistry paper in the first year health science course.

“Usually you just take the drug and you don’t think about how many people are involved in making it easy for patients to have them [drugs],” Nadeen says.

“You don’t think about what has happened before then to get to that stage.”

The school’s associate dean academic, Natalie Medlicott, who has had a long association with admissions into the Bachelor of Pharmacy degree programme, says it is highly unusual to have three sets of twins in one academic year. It is believed to be the first time this has occurred at the school.

There is plenty of potential for confusion for school staff. For example, while Weam and Wala are not identical twins, their names alone are a recipe for confusion with two “W Edwik’s” in P2. Despite this, Wala says there has been no mix-ups.

“There have been no complications at all, it’s been a mostly positive experience.”

She adds the sisters are not in the same group, so this helps avoid confusion.

They have lived in New Zealand for three years now and are starting to come to grips with the English language. They are finding their pharmacy studies challenging with regular exams and busy weeks, but the ability to have a ready study partner is a bonus and staff offer support.

Qiaoyue and Yingyue have similar sentiments, saying they are having to work hard to keep up with studies, but are finding the challenge stimulating. The pair have lived in Dunedin for more than three years now, having done their final two secondary school years in the city.

Their parents were keen for them to study in New Zealand and the idea of studying pharmacy was planted for Qiaoyue by a physics teacher at St Hilda’s Collegiate in Dunedin.

Like the others, Qiaoyue and Yingyue believe it is too early to say what area of pharmacy they hope to work in once they graduate, but Yingyue has particularly enjoyed the community placements.

The twins all share similar sentiments about their time to date at the school, with the words “friendly” and “helpful” repeated often, relating to both staff and fellow students.