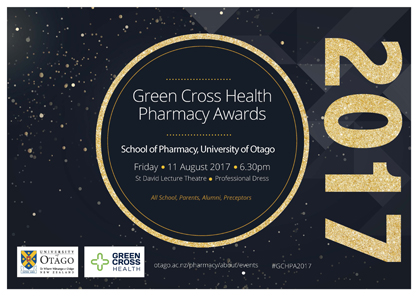 The University of Otago, School of Pharmacy, is excited to announce the inaugural Green Cross Health Pharmacy Awards Ceremony, which will be on Friday 11 August 2017.

Historically, the school has recognised undergraduate students in an annual awards ceremony, but thanks to the support of Green Cross Health, the awards ceremony has been expanded to be a celebration and recognition of outstanding students, staff, preceptors and alumni.

School dean Carlo Marra says the school is honoured to house some of New Zealand’s best researchers and teachers, whose leadership and guidance is reflected in the school’s high-achieving postgraduate and undergraduate students.

The awards ceremony will provide an opportunity to recognise these staff members.

Director of the undergraduate programme, Arlene McDowell, who is coordinating the teaching awards, together with postgraduate programme director, Dan Wright, says the idea behind these awards is to compliment the awards currently given to staff for research.

“Being an academic involves these two components and so we wanted to recognise those who are achieving great things in their teaching portfolio,” Dr McDowell says.

There will be a number of awards distributed for research and two awards for teaching for staff who demonstrate excellence and innovation (see below).

Professor Marra says the school is lucky to have a history of supportive preceptors and wishes to show its appreciation. A new undergraduate curriculum is on the verge of being rolled out, which will see an increase in preceptor involvement.

Professional practice fellows Aynsley Peterson and James Windle, who have co-ordinated these awards describe preceptors as often the “unsung heroes” of the profession.

“It’s such a crucial role and that interaction between preceptor and student can, and has, shaped future career choices,” Ms Peterson says.

“They are our colleagues and fellow professionals in the pharmacy world and it’s nice to have the opportunity to recognise some of this great work, even if it is in a small way.”

In an effort to reaffirm connections with alumni, an inaugural Distinguished Alumnus Award will be presented to the awards ceremony’s guest speaker.

Everyone at the school is welcome to the awards which will be held at the St David Street Lecture Theatre on Friday, August 11, from 6.30pm. Please send your RSVP to pharmacy.events@otago.ac.nz.

2016 Rural Preceptor of the Year

2016 Hospital Preceptor of the Year

2016 Community Preceptor of the Year