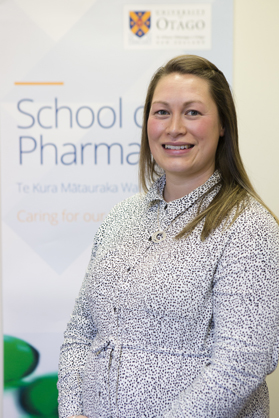 "I've learnt the only way that we will change the disparities in health are actually making the effort to know and understand the culture," says the School's new Pacific adviser, Kasey Brown.

Wellington pharmacist Kasey Brown has been appointed to a part-time role at the School of Pharmacy as Pacific adviser.

It’s a natural progression for the New Zealand-born Samoan who was a member of the Pacific Island Health Professional Students’ Association throughout her Bachelor of Pharmacy Studies.

Her passion for both Pacific and Māori health was also strengthened during the almost five years she lived in Gisborne, working in both hospital and community pharmacy.
“I have a much better appreciation for the culture as I have been literally immersed in it, with visits to the marae up the coast, pōwhiri, food experiences and Te Reo [the Maori language],” Kasey explains.

Currently, she is a clinical pharmacist at Wellington Hospital. She is well aware of her culture’s poor health statistics and hopes that by encouraging more Pacific people into pharmacy she can help turn things around.

“Health statistics for Pacific Islanders and Maori do not differ a lot and I’ve learnt the only way that we will change the disparities in health is by actually making the effort to know and understand the culture,” she says.

“Without that, we will never change the system, no matter what all our knowledge is about medications.”

Kasey has established a New Zealand Pacific Island Pharmacy Group on Facebook and hopes over time it will develop into something bigger.

There are large roles in the health professional schools for positions such as this to help with student recruitment and to facilitate communication with Pacific health organisations and communities, Professor Marra says.

He has given Kasey a blank canvas on which to develop the role, but she is looking to build a foundation on which to help Pacific students understand pharmacy and to help differentiate it from the other health professions.

Most people do not understand exactly what pharmacy involves, Kasey says, as she herself had little understanding prior to enrolling at the School of Pharmacy.

“Pharmacy found me, rather than me wanting a career in pharmacy as I had little knowledge about what the profession really was.”

Article written by Liane Topham-Kindley for the School of Pharmacy Newsletter V2I2, August 2017