Pharmacy, a meaningful career to society 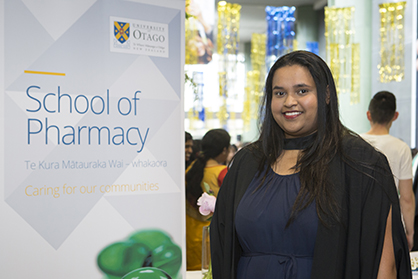 Bhamini Rangnekar at the 2017 School of Pharmacy Graduation Function

On interviewing 2017 Honours graduate, Bhamini Rangnekar, it was obvious she had found her niche in pharmacy. Bhamini’s love for people drives her interest in medicines research, a field of study that has proved to be a great success for this Otago student.

As a secondary school student in Hawkes Bay, Bhamini admits that a Bachelor in Pharmacy was never on her radar, “which is a pity because I think it is one of the most underrated fields in health,” comments Bhamini.

Bhamini hated chemistry and biology at school. If you asked her now she would say, “Chemistry is my favourite subject but that is because I now understand it. I don’t have to just memorise the reaction pathways like in high school. So, I know people say to use the subjects you like in school to choose your career, but I know that would have been bad advice for me because I loved physics and maths but I promise you, I would make a terrible engineer.”

“I love helping people. It’s as cheesy as it gets, but it’s true. I love knowing I’ve improved someone’s life and I like interacting with people from all walks of life, so I think I’m definitely in the right career for me. If anyone is considering it I say just go for it!”

Bhamini has done just that! Under the direction of Dr Shyamal Das and with the help of other group members, Bhamini contributed to the work of three manuscripts (all under review) and three conference presentations-one of which is published as a peer reviewed full conference paper. She participated in a poster competition at the Infectious Diseases Queenstown Research Week Conference, placing first equal with a post-graduate student from Auckland and received 2nd place in the School of Pharmacy Honours Symposium. 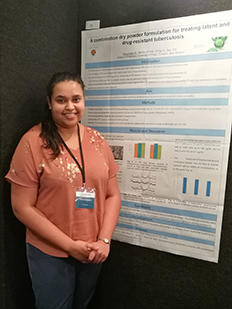 Bhamini’s talent for research was evident in her second year of pharmacy (2015) when she received an Otago Medical Research Foundation Scholarship of $4000 to participate in the Health Science summer research project. Under the direction of supervisor, Dr Shyamal Das and PhD student, Basanth Eedara, Bhamini co-authored two research papers which are under review in two international journals. This work was also presented at the Drug Delivery to the Lungs 27th Conference in the United Kingdom, Drug Delivery Australia 2016 and the Australian Pharmaceutical Science Association (APSA) 2016 Conference.

In 2016, Bhamini received a $5000 scholarship from the School of Pharmacy to participate in the Bachelor of Pharmacy Honours programme and conducted research to investigate approaches to combining inhalable medicines to treat drug-resistant tuberculosis. Under the supervision of Dr Das and PhD student, Mohammed Momin,and Bhamini co-authored another research paper, which is also under review in an international journal. From her Honours research, Bhamini plans to publish her first research paper soon as lead author.

She is looking forward to her internship in Greymouth where she will spend 6 months in Unichem Olsen’s Pharmacy and 6 months at Greymouth Hospital, a rare opportunity for interns.

“I am extremely impressed about the community pharmacy because they offer everything under the sun,” she says “I went and visited it for a day and it’s so huge with 3 consultation rooms. So, I have a lot to look forward to as well as learn!”

Read Bhamini’s undergraduate profile on our website to find out why she choose the University of Otago.

Article written for the School of Pharmacy newsletter, Volume 2 Issue 3