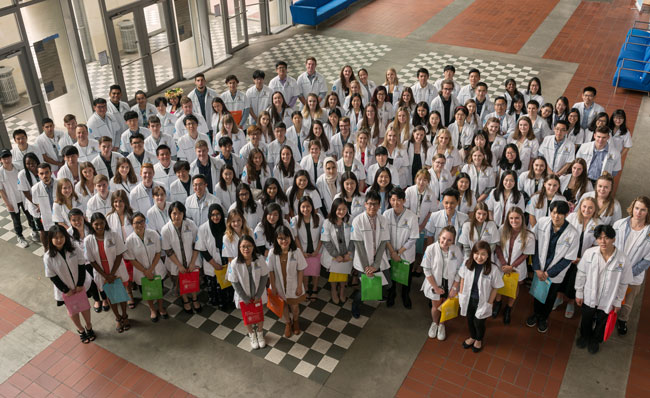 Over 130 aspiring pharmacists were officially welcomed into their first professional year of Otago’s Pharmacy programme at the School of Pharmacy’s White Coat Ceremony on 24 February.

A large audience that included family, friends and what School of Pharmacy Dean Professor Carlo Marra referred to as an “all-star cast” of New Zealand pharmacists, gathered to see students receive their white coat – an iconic symbol of the pharmacy profession.

Vice-Chancellor Professor Harlene Hayne, speaking at her first White Coat Ceremony, told the students they should all feel “very proud”.

“You have survived the first-year health sciences programme and have been hand selected to be part of the School of Pharmacy,” she said.

In addition to hearing from the Vice-Chancellor, the students were also welcomed by Pro-Vice-Chancellor of Health Sciences Professor Peter Crampton, Associate Dean Māori Leanne Te Karu from the School of Pharmacy, and Professor Marra, Dean of the School.

For the first time since White Coat Ceremonies began at Otago in 2011, the families of the incoming class were invited to attend the ceremony.

"It takes a village to raise a pharmacist and you are all part of this village."

In his address, Professor Crampton told family members, “it takes a village to raise a pharmacist and you are all part of this village.”

The pharmacy ‘village’ also includes over 2,000 School of Pharmacy alumni who were invited to participate in Saturday’s ceremony in a unique way.

Tucked into the pocket of each white coat were White Coat Wishes – inspirational messages, words of advice and well-wishes – from Otago graduates who are now practising pharmacists across the country.

“Of course, our alumni can’t all be here to welcome these students in person, so we are delighted that so many took the opportunity to share words of encouragement through our White Coat Wishes campaign,” said Professor Marra.

Though the significance of the day hadn’t quite sunk in for some of the students, for those like Angela McEwen of Gisborne, receiving the white coat is the realisation of a life-long goal.

“It’s always what I wanted to do,” she said. 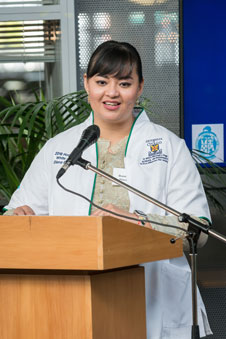 At Saturday’s ceremony pharmacist Diana Phone was presented with this year’s Honorary White Coat as a distinguished member of the pharmacy profession.

Ms Phone is a practising pharmacist at Waimauku Pharmacy in Auckland.

Since graduating from Otago in 2009, she has earned several accolades within the profession including the Professional Service of the Year Award, Supreme Award, and Innovation in Delivering Care and Advice award at the 2017 Pharmacy Awards. Her employer, Waimauku Pharmacy, also received the Community Pharmacy of the Year that same year.

In accepting her Honorary White Coat, Ms Phone shared insights from the early days of her career as a pharmacist in a high-deprivation community.

Recounting a particularly challenging experience which led her to question her chosen path, she spoke of turning her discouragement into motivation.

“This is my chance to stand up for my belief that community pharmacists are valuable contributors to the New Zealand health system and we don’t just belong in the dispensary,” she said.

She went on to tell the students that becoming, and being, a pharmacist “is not going to be easy”.

She challenged them to figure out what the white coat means to them.

“Just like how each one of your white coats will fit differently, so too will your place in pharmacy. You just have to find the coat that is tailored for you.”