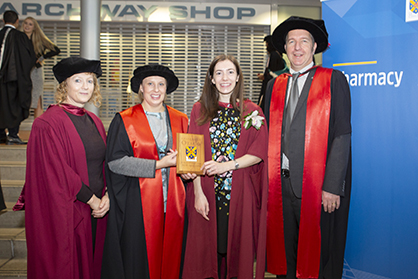 Originally from the United Kingdom, Dr Anna Cooper completed her Bachelor of Chemistry with Pharmacology at the University of St Andrews, taking a year to travel before completing her Masters of Drug Discovery at the School of Pharmacy, University of London.

Dr Cooper worked in publishing in the Biochemical Society for a year and a half before moving to New York with her boyfriend (now husband) where she worked in science, communication and outreach for the World Science Festival. “I really enjoyed it,” she says.

“A large part of that job was working with scientists and trying to disseminate their work and develop it into programme ideas for the festival. So I spent a lot of my time talking to these people and I realised that I really did want to go back and do my PhD”.

“I didn’t want to do it in the States because usually the PhDs there are much longer and you end up doing taught classes at the beginning, and I felt like I had done enough of that, of going to lectures and so on. I just wanted to go straight into the research.”

Dr Cooper searched the world for a project of interest and a new location to explore “we wanted to go somewhere new in the world to have those new experiences as well”.
It was Dr Andrea Vernall’s project “Development of fluorescent ligands for CB2 receptor,” that caught her attention.

“There is really little research known about the intricate detail of the CB2 receptor and how it works,” she says, when explaining her research.

Dr Cooper made fluorescent ligands to be used as imaging tools so that biomedical researchers could use it to study the CB2 receptor, learn more about how the receptor works and its effects and role in different diseases such as cancer, Alzheimer's, Parkinson’s, Huntington’s and heart diseases to name a few.

“Hopefully we can make better drugs to target that receptor and treat some of those diseases.”

She says her PhD experience was “really great because I got to do elements of the whole project”, synthesising compounds and doing the chemistry as well as doing the pharmacology side of things.

Dr Cooper received funding to travel to Auckland and was hosted in Professor Michelle Glass’s lab at the University of Auckland, Department of Pharmacology and Clinical Pharmacology, who was a collaborator on her PhD project.

“It was really exciting to be able to go there and do that myself and get the results in real time and kind of feel really invested in it”.

It was on her final trip to Auckland that she received the results she was hoping for. The fluorescent ligand she had made resulted in a good affinity for the receptor. “It’s not perfect, it needs a lot of work”, she says of her major accomplishment.

Dr Andrea Vernall says, “Anna has done extremely well during her time in Dunedin, she has flourished as a researcher and has been a pleasure to supervise. She has made a great contribution to the cannabinoid research field and will be missed when she moves on to the next challenge.”

“They gave me the right balance of guidance and supervision but also allowed me to be independent and find my own way,”

and “I really liked the School atmosphere as well; I think it’s a lovely place to work. A really supportive, social, friendly environment”.

Article written for the School of Pharmacy newsletter, Volume 3 Issue 1.