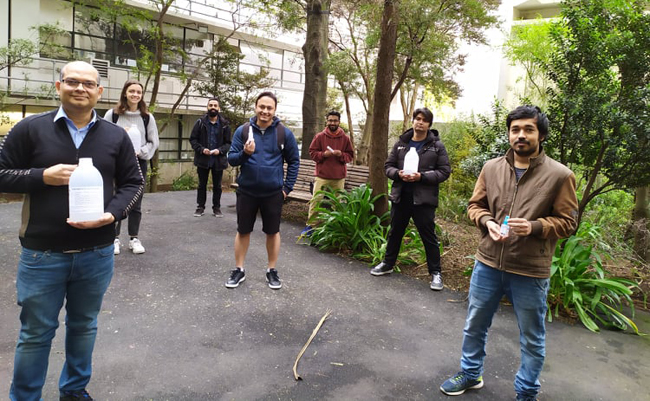 An attitude born from the floodwaters of Bangladesh is now helping save lives in New Zealand.

The COVID-19 pandemic has led to many unusual outcomes; lockdowns, physical distancing, supermarket-aisle fights over toilet paper. But one of the more alarming outcomes has been a dearth of hand sanitiser.

The SARS-CoV-2 virus that causes COVID-19 is easily spread via people’s hands. An infected person may cough or sneeze into their hand then shake someone else’s hand, touch a supermarket trolley, or perhaps an elevator button. The best advice is to wash our hands with warm soapy water, but often that isn’t possible.

That’s where hand sanitiser comes in, and people know it. Around the country supermarket shelves were quickly stripped of hand sanitiser as the virus spread, and even large entities needing a constant supply have been struggling to source it.

Enter Dr Shyamal Das, Senior Lecturer at the University of Otago’s School of Pharmacy. Dr Das has hit New Zealand’s mainstream media headlines in the last few weeks as he and his team of students volunteer their time and skills to make hundreds of litres of hand sanitiser for needy causes around Dunedin and New Zealand.

Hailing from the greater Dhaka’s Gazipur district in Bangladesh, Dr Das was brought up in a village surrounded by extended family. Although it’s fair to say he was surrounded by more than just family – Bangladesh is one of the most densely populated countries on earth with its 161 million people squeezed into 147,570 square kilometres of land. In contrast, New Zealand’s five million people have a whopping 268,000 square kilometres to share.

Bangladesh is also low-lying. The combined waters of many major river systems dissect the land and, frequently, flood it. Oftentimes those floods are devastating. And it was those frequent floods that helped shaped Dr Das’ response to disasters, and his response to COVID-19.

Tornados in 1996, when he was studying pharmacy at Jahangirnagar University in Bangladesh, killed 600 and left 100,000 homeless.

“There was always some uncertainty in life. However, Government and people who were not affected would come forward to help or rescue the affected people. Social organisations, student bodies, affluent people would come forward.”

"As a human being I believe we were not born to think for only ourselves. We have to do something for mankind, within our ability. I always believe in giving back to the community."

The Bangladeshi people learned, through such times, “how to survive fighting with disasters”, he says.

“We developed the culture that we needed to help people in need.”

As a student in Bangladesh he was involved in many voluntary organisations.

“We used to volunteer in natural disasters such as floods and cyclones which were common in Bangladesh. We used to give foods, clothes, medicines for free. During floods, at the university, we used to make breads and then went to flood-ridden areas to distribute those.

Later, while a lecturer at the University of Bangladesh, he served as an Assistant Proctor which led to him becoming involved in many university welfare issues.

After several years at Melbourne’s Monash University – where he gained his PhD – Dr Das moved to the University of Otago’s Dunedin campus in 2013 as a Senior Lecturer in Pharmacy. In both southern hemisphere cities he has opened his life and his home to help serve the local Bengali community.

“I have a passion for voluntary social service, a passion for helping people. As a human being I believe we were not born to think for only ourselves. We have to do something for mankind, within our ability. I always believe in giving back to the community.”

With that context, it is easier to understand why Dr Das was so willing to lead his team of volunteer School of Pharmacy students to create huge stocks of hand sanitiser. 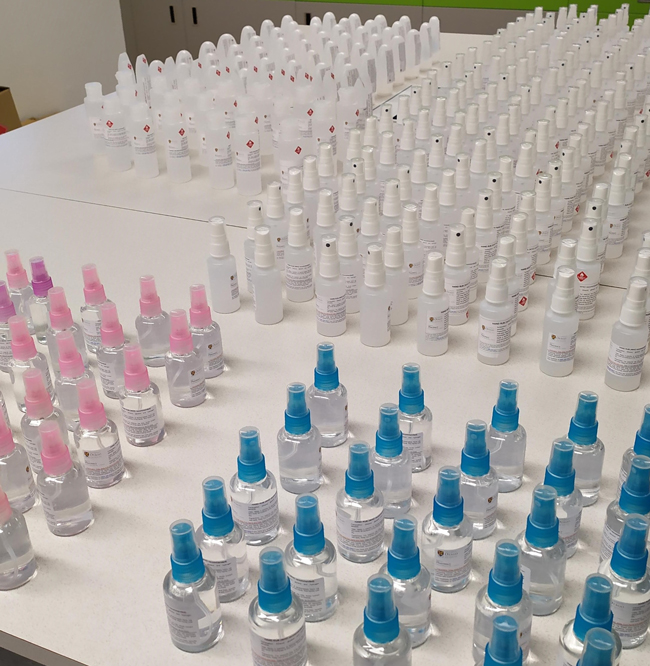 Some of the many bottles of hand sanitiser made by the University's School of Pharmacy.

“When the COVID-19 pandemic started I desperately felt I should do something in this humanitarian crisis. In two weeks, two pharmaceutical companies contacted me to contribute to their inhaler development. But it requires experimentation and may take some time, although hopefully we will be able to do that.

"In the meantime, I found there was huge shortage of hand sanitiser – an essential thing to maintain hygiene, to reduce the spread of microorganisms and save lives. I know as a pharmaceutical scientist we have this background. I thought, we have this skill and ability, so why don’t we help?"

“In the meantime, I found there was huge shortage of hand sanitiser – an essential thing to maintain hygiene, to reduce the spread of microorganisms and save lives. I know as a pharmaceutical scientist we have this background. I thought, we have this skill and ability, so why don’t we help?”

University of Otago School of Pharmacy Dean Professor Carlo Marra says alongside Dr Das the postgraduate students and an undergraduate BPharm (Hons) student “gave unselfishly of their time” to assist with the preparation of this highly needed sanitiser.

“These students, many of them pharmacists, are all training in pharmaceutical sciences methods that will provide benefit to society. I believe that this is just the beginning of the great things that these students will achieve to contribute to health and health care.”

“Their roles range from community and hospital pharmacists who provide front-line care, right through to initiatives such as this – pharmaceutical scientists using their skills and knowledge to help the community combat COVID-19.”

Dr Das, who lives in Dunedin with his wife and two daughters, says it isn’t just his team who are doing the right thing. His city and country are also making the right choices to “overcome this pandemic”.

“The best thing we are doing is abiding by the laws. We are staying home. Isolation is the key. But the other thing – every person who can, should help with their abilities. In addition to the government, non-government organisations, philanthropic organisations, wealthy people, they can all come out to help.”