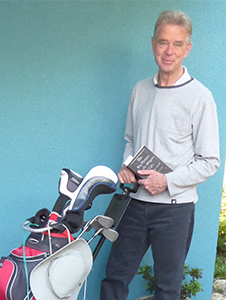 “Everything you need to know in life you learned in kindergarten. Like learning to look after each other, sharing the toys in the sandpit, and holding hands when you’re going out in the big, wide world.”

This was one of the insights from the then Dean of Pharmacy Professor Ian Tucker in a graduation speech to pharmacy and education graduands. It is something the now Emeritus Professor still believes as he enters retirement after 30 years at Otago.

Ian is the longest serving Dean of the School of Pharmacy at Otago, having held the role from 1999 until 2010. He joined Otago as Professor in Pharmaceutical Sciences in 1991 moving from the University of Queensland.

The qualities of collaboration, creativity and a love of knowledge are apparent throughout Ian’s illustrious career, which has centred around a fascination of what drugs do to the body, what the body does to drugs and how to deliver drugs most effectively. This passion was recognised when he was President of the International Controlled Release Society and received the organisation’s distinguished service award.

“In a University you can let your creative curious mind run wild and investigate just about whatever you want. You’re working with people who have dedicated their lives to becoming experts in particular areas.”

Ian has worked across both veterinary and human medicine throughout his career. After graduating, he spent a year on a Postdoctoral Fellowship Scholarship in Scotland working with leading pharmaceutical scientist Professor Sandy Florence in 1982. He then returned to Australia as a Post-doctoral awardee with the Commonwealth Scientific and Industrial Research Organisation, where he worked on a formative project in his career.

“The wool industry had a problem. Australian shearers were a dying breed and wool was worth a lot of money. There were two novel defleecing approaches being explored - robotic shearing and a biological approach, which I was involved in.”

“A protein called epidermal growth factor turns off the wool follicles for a certain time and produces a weakness in the wool. You can pluck it instead of shearing - a less skilled job to address the labour shortage. The challenge was getting the dose right - too little doesn’t produce enough weakness to pluck. Too much and the wool falls out around the paddock and you end up with a nude sheep.”

A more recent challenge Ian has been addressing with Professor John Reynolds is how drugs get into the brain. Brains have developed a very effective ‘blood brain barrier’ that prevents most drugs getting in, he says.

One of Ian’s significant contributions to his profession has been in commercial opportunities for research, including intellectual property arising from research institutions. After serving as Dean of Pharmacy, Ian was appointed to a newly created position as Associate Dean Research Commercialisation in the Division of Health Sciences.

As pharmacy is an applied science that draws on physics, chemistry, biology, biochemistry, physiology, pharmacology, materials science and more, Ian says it is natural that he is also interested in commercial applications of pharmacy.

Through approaching companies and presenting the opportunities of research, Ian collaborated on the development of veterinary medicines products including vitamin B12 implants for sheep to compensate for the cobalt deficiency in New Zealand pasture, and treatments for mastitis in dairy cows.

He worked particularly closely with New Zealand animal health company Bomac, a relationship that continued when they were bought by international giant Bayer.

“My work is always collaborative, and I have had many smart people to collaborate with. I enjoyed the interactions with the commercial world. I would go to meetings where I sat around the table to discuss applied research projects and there would be experts in marketing, intellectual property, regulatory affairs, veterinary science, and management. You put all that knowledge around the table and it’s a really stimulating environment. To have all those complementary skills coming together on an issue is fascinating and rewarding.”

While enjoying industry collaboration, Ian was pleased to remain in the academic world.

“In a University you can let your creative curious mind run wild and investigate just about whatever you want. You’re working with people who have dedicated their lives to becoming experts in particular areas.

“To be able to sit and talk or go to lectures by your colleagues and friends who are world authorities on topics from archaeology to zoology … it is truly stimulating and a great privilege.

“I want to thank the University for my Emeritus Professorship. This is a great honour for me. It provides opportunity to remain associated with Otago, an institution which I have served happily for 30 years and which has given me tremendous opportunities. I have enjoyed the intellectual, creative culture, international travel, working with inspiring colleagues, teaching smart young people, opportunities for stimulating research - and I have been paid for these privileges. Thank you.”

Ian will remain connected to the University in his retirement, and he is not short of things to do.

Family is very important to Ian. The relocation to Dunedin from Brisbane when his three children were 15, 13 and 10 years old was a big decision. One of Ian’s proudest achievements is that the “ten most brilliant children in the world” are all his grandchildren.

He reads widely and is writing poetry. He gardens and is trying to budge a stymied golf handicap. He’s an active member of the community, with a good network of friends. You may notice the world is very peaceful on Thursday afternoons as Ian and a neighbour have solved the problems of the world over coffee on Thursday mornings.