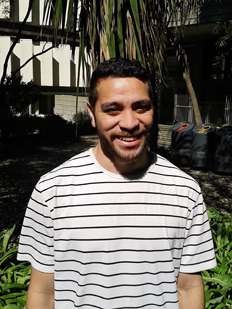 What made you decide to do Pharmacy?

It was a profession that, I knew, not many Pacific Islanders studied and knew about. I love helping people and making sure they are getting as much benefit from their medicines as possible. I was also interested in having a business to add to the health profession side.

What did you know about Pharmacy before you started your BPharm?

That Pharmacy is the study of drugs and pharmacist gave drugs out.

Where do you hope a career in Pharmacy will take you?

I would first like to be out at the community working at a pharmacy to interact and gain as much practical knowledge as possible, then if still interested I would like to try out hospital pharmacy at some point in my career. Ultimately I would like to run my own pharmacy in a community that would will benefit most from my experiences and skills. I also do not rule out any further studies in the future as pharmacy is a profession that is picking up new roles.

Why did you choose Otago?

Otago was unknown to me when I first decided to go university, but I learnt about it in an expo in high school while studying in Auckland. I saw the chance of moving away from family and being independent as one of the reason for moving down to the Deep South. I also liked that the city was very much student dominated and was not crowded like Auckland.

What is/are the best thing(s) about being a Pharmacy student at Otago?

It is a very well-planned degree, with good facilities. The teaching staff are very helpful and allow time for students when needed. There is always support when needed, from the School of Pharmacy or other university support centres.

Do you have any plans for you internship?

I will be doing my internship in South Auckland in a community Pharmacy setting.

Can you tell us a little bit about yourself and your background?

I am a 24-year-old Tongan that grew up in Tonga and went to school in the islands until 7th form, when I moved to Auckland to attend Wesley College. After one year in Auckland I made the move down to Dunedin to further my education. I moved into Toroa College of residence and chose to study Health Science First Year. I was unsure of what health professional course I wanted to enter after Health Science First Year, so instead chose to study Biomedical Science and graduated in 2012 with a Bachelor in Biomedical Sciences. I then decided to study Pharmacy and have never looked back.