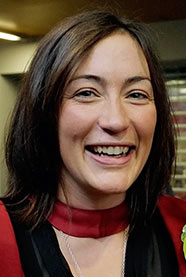 I am currently focused on a project funded by the Bill and Melinda Gates Foundation, which aims to develop a child-friendly amoxicillin formulation to treat pneumonia in developing countries. We are looking at suppositories to achieve this because they are cheap and easy to manufacture and require neither clean water nor trained health care providers to administer. There are challenges too, such as their ability to withstand high temperatures and perceptions of parents, carers and children surrounding rectal delivery. As such, my work involves both formulation development and public engagement to explore barriers to acceptability of the rectal route and how this may be improved.

I grew up in Dunedin, so attending Otago University was the obvious choice for me. However, I liked being an undergraduate student so much that I ended up coming back. Staff at the School of Pharmacy were fundamental in developing my interest in research as an undergraduate and when I decided to come back and pursue further study I was lucky to have a great bunch of postgraduates and excellent support from my PhD supervisors, Assoc. Prof. Natalie Medlicott and the late Prof. Jules Kieser (Faculty of Dentistry).