We asked some recent graduates to tell us about their time studying Energy at Otago, and where it has taken them so far.

"Renewable distributed generation, electric vehicles and batteries, the rise in internet connectivity and increases in quantity of data are changing the industry at a rate that has not been seen since the industrial revolution"

Some of our graduates arrived at University with an interest in the energy industry already piqued, such as by the threats of power blackouts from low hydro lake levels. Others found that the science of fluid flow and thermodynamics they encountered during first-year physics was something interesting and fresh compared to high school, and their interest grew from there. For some, the interest in understanding systems and exploring new solutions to challenging problems, not just through the lens of Physics but also Economics, was a draw.

What did you enjoy studying?

A common repsonse to being asked their favourite part of studying was doing Energy Audits. One noted that they had "had the chance to go to a brewery, school and shopping mall to undertake real energy audits" and they considered that it "really ignited [their] passion for energy efficiency". The real-life aspect of Environmental Physics was appreciated too. Others most enjoyed learning aspects of energy policy, or the opportunity to tackle case studies on anything from the Think Big projects of the 1980s to modern-day Central Otago wind-farm proposals.

The graduates also had some kind words for our staff, past and current, describing them as "knowledgeable, passionate and willing to go the extra mile" and "super approachable".

When asked why they choose to study at Otago, our graduates often spoke of the overall student experience: "Dunedin offers the complete package, great education, sport organisations and student life"; "I was ready to move out of home and gain some independence in a city made for students"; "one of the cheapest places to study in New Zealand (study costs wise)"; "Both of my parents where ex-Otago students ... I was brought up with an understanding of the great student culture that Otago has to offer"

Lucy Driver began her studies at Otago on a different path, but realised she wanted a change. Her interest in maths, the environment and science prompted her to give Energy science a go, and she has no regrets!

For Lucy, her Energy degree has helped her current career in construction project management by giving her an understanding of the theory behind building HVAC systems which allows her to understand what is going on in building projects. It has also allowed her to understand renewable energy systems that can be applied to buildings that she is working on.

She enjoys her role as project manager for a New Zealand-based project mangment company as she communicates with a wide range of people daily — consultants, contractors and many other stakeholders — to achieve completion of the client's goal. 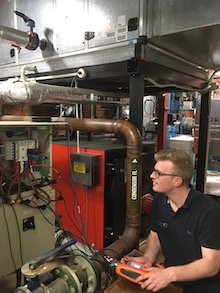 Ben Thomson started working for an energy engineering consultancy in Christchurch after graduating, which has meant being involved with a wide range of projects such as meat processing plant, mushroom-growing facilities, defence force bases and airports. He's now in Wellington leading a small team of engineers providing energy managment services.

Ben thinks the degree in Energy Management has helped his current career. He says, "It was the perfect fit for the job I ended up doing, however the skills learnt can be applied to a wide range of jobs in the industry."

As Ben sees it, "The energy industry is currently undergoing massive changes primarily brought on by changes in technology. Renewable distributed generation, electric vehicles and batteries, the rise in internet connectivity and increases in quantity of data are changing the industry at a rate that has not been seen since the industrial revolution. It is an extremely exciting time to be in the energy industry with huge opportunities to undertake innovative and interesting projects." 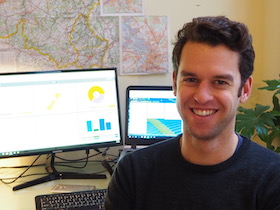 “I initially didn’t know which direction I wanted to go into with my studies but knew that I enjoyed understanding and solving problems and a logic mind that took to numbers, so in my first year, took Physics, Mathematics and Economics courses."

Through his second year, he started building an interest in the energy sector as major themes of scarcity of resources, peak oil, the physics of climate change, thermodynamics, renewables and the current state of the energy industry were all addressed.

Charlie started his career as an energy trader, going on to develop new products and services with solar and batteries for the New Zealand market as the Product Manager for a New Zealand solar energy business. After moving to the Netherlands, he has continued working in the solar energy and battery storage sector as a freelance consultant as well as contributing to economic research with NZIER into the economic viability of solar and batteries in South Pacific Island states.

For Charlie, Energy Science and Technology "was the perfect course to establish the understanding required to contribute to a challenging and growing industry. Everyone uses energy and the course gave both the academic theory to understanding how the energy system hangs together as well as the practical skills for analysis, critical thinking and communication required to excel in the real-working world.”

Working in Europe, Charlie has had a glimpse of the acceleration of the renewable and smart energy transition there. He says, "There is a fundamental shift occurring in the energy industry; decentralisation, decarbonisation and digitisation are taking hold. Distributed renewable electricity resources including solar PV, batteries, electricity vehicles as well as smart energy devices in homes and buildings are being installed at an accelerated rate around the globe. I see a future powered by renewable electricity and plan to continue working towards this future."