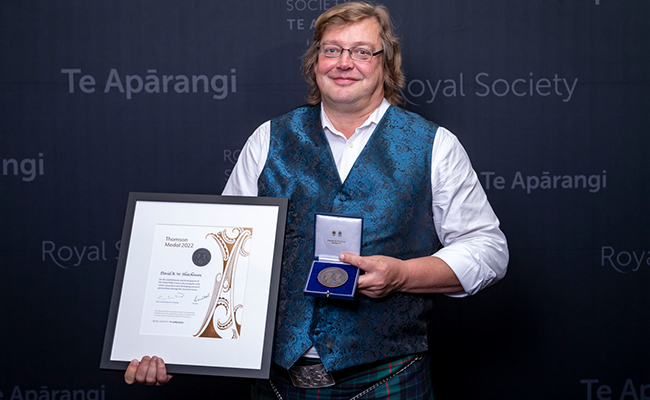 Professor Hutchinson received the Thomson Medal for his excellence in leading the successful bid and subsequent development of the Dodd-Walls Centre for Photonic and Quantum Technologies (DWC), and for his valuable contributions to early career researchers and community outreach programmes.

The DWC is now a well-established and internationally renowned physics research centre based on the manipulation of light at the most fundamental, quantum level, and the control and manipulation of matter at the atomic scale.

Professor Hutchinson says receiving the Thomson Medal is a wonderful recognition for what the Dodd-Walls Centre has achieved over the past decade since its inception as a Centre of Research Excellence.

“It was the membership of the DWC who put their faith in me and allowed me the opportunity to lead the Centre,” Professor Hutchinson says.

“So it’s been great to have been successful in that endeavour, and that includes securing the next round of funding to support the DWC through to 2028.”

While hosted by the University of Otago, the DWC brings together six New Zealand universities and around 200 members in research that supports industry, underpins the development of new technologies, and informs education programmes to expand the country’s rapidly growing knowledge economy.

In his role as Director of the DWC since 2015, Professor Hutchinson has focused on consolidating and strengthening New Zealand’s international leadership in atomic, molecular and optical physics.

“The stable funding coming through the Centre, and the aggregation of researchers and enhancement of collaboration, has lifted our ability to contribute at the highest international levels and raised our international profile," Professor Hutchinson says.

“New Zealand has always been highly regarded internationally in the field of quantum and optical physics, so the DWC has provided the structure to consolidate and grow our strength in Aotearoa, and we have worked hard to form strong national collaborations.”

"I see one of our jobs as science leaders as that of harnessing that curiosity and making sure it’s kept alive from primary education and even earlier, through to high school and beyond."

In addition to recognition for his leadership in the field, the Thomson Medal also acknowledges his support for early career researchers and the value of nurturing and growing relationships through outreach programmes.

Professor Hutchinson was Convenor of the University of Otago's Ozone Group of Early Career Researchers for some years. After being nominated by the InterAcademy Partnership to attend the World Economic Forum as an ‘Outstanding Young Scientist’, he became a founding member of the ensuing Global Young Academy, which advocates for early career researchers across the globe, including those from developing nations.

Through his role on the board of the Otago Museum, including most recently as Chair, Professor Hutchinson has helped develop a close partnership programme to deliver a comprehensive science outreach programme across both Aotearoa and the Pacific.

Professor Hutchinson says these reciprocal relationships have been hugely successful in communicating the work of the DWC and wider research community, as well as enhancing science engagement with younger cohorts and communities.

Recently the outreach team held inaugural science festivals on the Chatham Islands and in the Cook Islands, building on these strengthening relationships.

“It’s all about growing and nurturing relationships, and I’m really proud of all the initiatives that have taken us the length and breadth of New Zealand and to several Pacific Island countries.

“I’m surrounded by amazing teams of outstanding people who just make things happen. I'd like to mention specifically Craig Grant at the Otago Museum who is a wizard in his role conjuring up support for so many initiatives across the board.”

Professor Hutchinson says he’s incredibly passionate about science education, particularly for young people and children who are naturally curious about the world around them.

"I see one of our jobs as science leaders as that of harnessing that curiosity and making sure it’s kept alive from primary education and even earlier, through to high school and beyond."

At the DWC’s most recent symposium, Professor Hutchinson announced his intention to step down from the role of Director, a position held since the Centre’s inception in 2015.

“I’m really proud of what I’ve achieved in leadership and what we’ve achieved as a Centre over the last decade. The DWC now has a truly significant international reputation as a collective, being a flagship for New Zealand in the field of quantum and optical science and technology,” Professor Hutchinson says.

“To receive the Thomson Medal feels like a fitting capstone to my tenure as the Centre's Director and I'm incredibly grateful for the privilege bestowed upon me by my peers in allowing me to lead in this role, which has ultimately led to this much appreciated recognition."