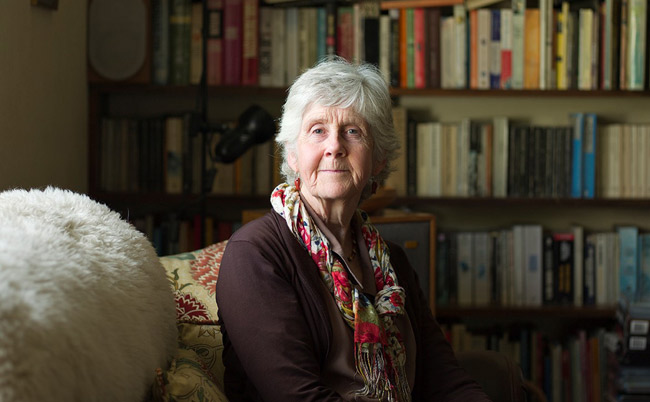 Professor Pat Langhorne’s first trip to Antarctica in 1985 made the front cover of Nature magazine and was the start of an enduring relationship with the continent.

Professor Pat Langhorne is quick to downplay the honour bestowed on her as the first female recipient of the New Zealand Antarctic Medal.

“It was a nice surprise and largely thanks to my lovely colleagues who nominated me.”

Professor Langhorne also acknowledges that in a place like Antarctica it is impossible to do anything alone, so the medal also symbolises the teamwork necessary to work in such an environment.

“The [Antarctic] community is very closely connected and it’s a real privilege to be part of that. It’s also where I have met many of my closest friends.”

"It was a nice surprise and largely thanks to my lovely colleagues who nominated me."

The New Zealand Antarctic Medal was instituted as a New Zealand Royal Honour in 2006, replacing the previous (British) Polar Medal, and awarded to individuals who have made an outstanding contribution to exploration, scientific research, conservation, environmental protection, or knowledge of the Antarctic region. The Otago Physics Professor was awarded it for services to Antarctic science in the 2019 New Year's Honours List.

Since making her first trip to Antarctica in 1985, and then regularly since 1992, Professor Langhorne has become one of New Zealand’s foremost sea-ice scientists with a specific focus on ice physics and understanding the interaction and relationship between ice shelves – derived from land-based ice and sea-ice.

Over that time, Professor Langhorne’s research has contributed significantly to scientific knowledge in the area, and Antarctica has reciprocated by directing and playing a huge part in her professional and personal life.

Professor Langhorne says she was fortunate to be raised in a science-friendly Scottish home which laid the foundation for her natural path into science.

However, harsher life realities surfaced when her application to the British Antarctic Survey at the end of a physics degree from the University of Aberdeen was declined on the basis of gender.

"New Zealand was way ahead of the UK for childcare and family-friendly attitudes. My colleagues were very broad minded and understanding about my time and family commitments."

“I had wonderful male colleagues and supervisors who were all prepared to fight on my behalf, but I decided to carry on with a doctorate at the Scott Polar Institute through the University of Cambridge.”

It was after completing her PhD in Cambridge that Professor Langhorne received an invitation from a visiting New Zealand scientist, Bill Robertson, to join his team examining the strength of sea-ice.

The 1985 trip, which made the front cover of Nature magazine, examined the physics that underpins the use of sea-ice runways for large aircraft, and also altered the future direction of Professor Langhorne’s life. Three years later she moved to New Zealand “as a pregnant wife” with her husband Professor Vernon Squire.

Professor Squire took up a permanent role in Otago’s Department of Mathematics and Statistics, and Professor Langhorne was offered a temporary teaching role in the Department of Physics.

“New Zealand was way ahead of the UK for childcare and family-friendly attitudes,” she recalls. “My colleagues were very broad minded and understanding about my time and family commitments.”

Professor Langhorne made her second trip to Antarctica in 1992, leaving her then two-year-old son at home with her husband for three weeks.

Her later research has focused on the measurement of ‘mushy’ platelet ice as the fingerprint of the interaction between ice shelves and sea-ice.

This baseline information for McMurdo Sound is now well understood and recent advances in technology mean this work can be extended to other parts of the continent.

“We can now measure this interaction from the air and cover much larger areas, so there are really exciting things happening in that space. Baseline information is important to ascertain what the situation is now, so we can accurately measure any future changes which are imminent.”

"Young people are very quick on computers and modelling which is crucial for underpinning these connections, so that’s also a new and exciting development with important and exciting implications for future research."

Professor Langhorne says the growing public acceptance of climate change and its anthropogenic drivers has accompanied changing attitudes towards science over the last few decades.

“Everything is connected, complicated and vast, which new approaches like Earth System Modelling recognise.

“Young people are very quick on computers and modelling which is crucial for underpinning these connections, so that’s also a new and exciting development with important and exciting implications for future research.”

Antarctica is and always will be a big part of who Professor Langhorne is, including her values, science and approach to life.

“One of the great values about Antarctic research is that it’s a place where countries manage to get on and collaborate and scientific diplomacy means the focus is very much on the science.”

There have also been many positive changes in the scientific community over the last few decades. Professor Langhorne recalls being one of a small handful of women attending a 1983 conference, compared to a current gender ratio of closer to half.

Even with such positive trends, Professor Langhorne says there remain many huge problems in the world that require answers and which the next generation of scientists can contribute to.

“Young people bring energy, enthusiasm and are agile thinkers which is crucial in this era where technology is playing a rapidly increasing role.

“Us older ones are only able to give them a bit of a practical reality check every now and again.”