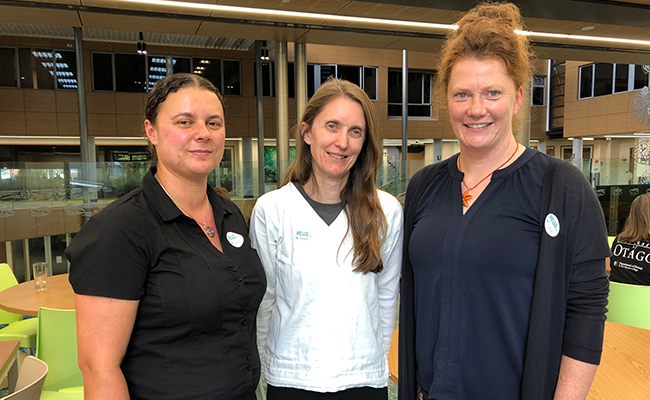 Earlier this year He Kaupapa Hononga successfully became a network funded by the university’s four Divisions, and last week it held its annual symposium bringing together staff and students from across Otago working on climate change-related mahi.

The name He Kaupapa Hononga refers to this joining together to become a multi-disciplinary framework of knowledge and practices, which supports the Network’s vision to become a centre of climate change research at Otago.

“We also want to grow Otago’s voice as an informed point of contact in the climate change field, and believe we can do that by bringing together researchers supporting the multi-disciplinary approach required to address climate change challenges,” says co-Director Associate Professor Sara Walton, from the Department of Management.

Associate Professor Walton was one of the team who, led by Colin Campbell-Hunt, started the Otago Climate Change Network (known as OCCNet) in 2012.

“The network grew out of a shared concern of the social consequences of climate change, and a need to come together to provide research-informed responses to these,” Associate Professor Walton says.

“Approaching this issue with many different lenses is necessary as there are many facets to consider, and the output from this work will be of greater value than any of us could achieve if we were researching in isolation."

She adds that due to this focus on social science it was a struggle to engage with the physical sciences at that time, but in 2018 Dr Inga Smith from the Department of Physics joined the network on request of Professor Ceri Warnock from the School of Law to help engage more physical scientists in the network.

Dr Smith says the Head of the Department of Physics, Professor Craig Rodger, has been very supportive of the efforts to revitalise the network, which included using the Department’s strategic research funding to employ physics graduate Kate Turner to carry out research and research-informed network building.

“Kate personally contacted Otago researchers in geography, geology, physics, chemistry, marine science and other related disciplines and built the network up to having more than 250 members on the email list,” Dr Smith explains.

Dr Smith and Associate Professor Walton are now the co-directors of He Kaupapa Hononga, and join with other representatives across the four Divisions to form the Network’s steering committee.

The operational workings of the Network are now facilitated by Dr Julia Wilson, an Assistant Research Fellow in the Department of Physics, who is currently researching science education and communication in te reo Māori.

Many of the He Kaupapa Hononga researchers also teach into the interdisciplinary paper ENVI 312: Interdisciplinary Aspects of Climate Change, a paper originally created by OCCNet.

This year the Network also offered its inaugural seed research grant to a multi-disciplinary group led by Botany Associate Professor Janice Lord, together with researchers from the Departments of Management, Economics and the School of Geography.

The group is undertaking a pilot project with Otago-based farmers on both the science and human dimensions of freshwater and wetland management in response to the recently enacted National Policy Statement for Freshwater Management.

“Approaching this issue with many different lenses is necessary as there are many facets to consider, and the output from this work will be of greater value than any of us could achieve if we were researching in isolation,” Associate Professor Lord says.

“At Otago we can help grow this powerful voice that can be used to inform, inspire and represent our communities in the climate change challenge we collectively face.”