Dodd-Walls Centre gets green light for another eight years 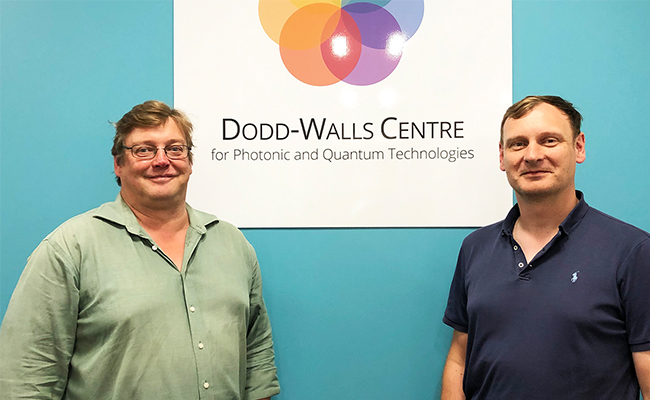 Professor David Hutchinson will always remember the date when he first arrived at Otago; 11 Sept 2000. Twenty-plus years on from that date, it’s likely we can still recall our exact location when the World Trade Centre made the headlines that day in 2001.

Professor Hutchinson recalls giving a lecture in the Department of Physics and, unaware of the news at the time, wondered why the students seemed a little distracted.

Thankfully in the two decades that have passed since, there have been many positive milestones to celebrate, and the recent announcement the Dodd-Walls Centre for Photonic and Quantum Technologies (DWC), Te Whai Ao, will receive a further $36.7m to continue operations, is a significant one.

Professor Hutchinson has been Director of DWC, a national Centre of Research Excellence (CoRE), since 2015 and over the last six years has focused on consolidating New Zealand’s international leadership in atomic, molecular and optical physics.

While the CoRE is hosted by Otago’s Department of Physics, the DWC involves five New Zealand universities in collaborative research which supports industry, underpins the development of new technologies, and informs education programmes to expand the country’s rapidly growing knowledge economy.

Te Whai Ao, the DWC’s Māori name, was suggested by Tuari Potiki, Director of Otago’s Office of Māori Development, and refers to the first beams of phosphorescent light that break through the darkness of night and herald the coming of a new day.

Professor Hutchinson explains the reference to light encapsulates the Centre’s research that is all about the opportunities that light presents, but also refers to the growth of people.

“New Zealand has always been highly regarded internationally in the field of photonics, so the DWC has provided the structure to consolidate and grow our strength in Aotearoa, and we have worked well to form strong national collaborations,” Professor Hutchinson says.

“We now have lots of examples of published papers with inter-institutional links, and the DWC has been instrumental in facilitating and strengthening these research relationships.”

University of Otago researchers from a broad range of Departments including Physics, Chemistry, Maths and Statistics and Computer Science comprise a portion of the almost 60 DWC researchers New Zealand-wide.

Dr Catherine Smith is a Senior Lecturer in the Archaeology Programme, and an Associate Investigator with the DWC, using optical methods to investigate materials used in pre-European Māori textiles, and exploring spectroscopy as a tool in the conservation of cultural materials.

Dr Smith says that as an interdisciplinary scientist based in the Humanities Division the DWC provides links with other scientists doing related work, including collaborators such as Professor Keith Gordon and Dr Sarah Miller from Chemistry.

Professor Hutchinson says that Otago’s strength has always been in fundamental research and advancing knowledge of quantum physics, including the precision control of matter at the atomic scale by light which underpins diverse applications such as computing, communication and medical.

He says he’s proud of the number of students that have been trained, about half of who gain employment in New Zealand following graduation.

“Photonics is a billion-dollar industry in New Zealand and is growing, so the graduates we are training are contributing to a highly skilled workforce and driving a growing a high-tech economy.”

The new Head of Department of Physics, Professor Blair Blakie, has been a member of the DWC since its inception and served on the executive committee.

“When I started my postdoc in the USA in 2001, I was blown away by the reputation that science leaders like New Zealand physicist Dan Walls had at the leading labs in the USA,” Professor Blakie says.

The DWC has built on this reputation, he says, by shining a light on the excellent quantum physics research which New Zealand has developed over the last 40 years.

The DWC science plan for the next funded eight-year period is based on the development of five cross-disciplinary research questions, including communications, and health and environment.

“The five areas consolidate the strengths of all DWC researchers into thematic elements that will be not only be flagships for New Zealand, but also represent where we can make a significant global contribution.”

Professor Hutchinson adds the longer-term period of CoRE funding provides greater stability to take on bigger challenges and projects like the ones planned for the next seven years.

“We feel passionately about the opportunities that scientific literacy brings and believe that the doors that a good science education opens should be available to all."

The other partners who have been integral to the success of DWC to date include the outreach institutions of the Otago Museum and Auckland’s Museum of Transport and Technology.

Since 2015, these reciprocal relationships have been hugely successful in communicating the work of the DWC and enhancing science engagement with younger cohorts and communities.

“We have partnered in a whole bunch of initiatives that have taken us the length of New Zealand including to communities of Great Barrier and Chatham Islands, and to four Pacific Island countries. When the borders open, we look forward to resuming our education outreach efforts in Niue, the Cook Islands and broader Pacific.”

“We feel passionately about the opportunities that scientific literacy brings and believe that the doors that a good science education opens should be available to all,” Professor Hutchinson says.

The new round of funding from the Tertiary Education Commission will take effect from 1 July this year, and the DWC will be joined by a new CoRE, Coastal People : Southern Skies, which will also be hosted at Otago.

Coastal People: Southern Skies is led by Co-Directors Associate Professors Chris Hepburn and Anne-Marie Jackson and will investigate ways to strengthen coastal communities in the Pacific as they deal with the challenges and opportunities of a changing climate.