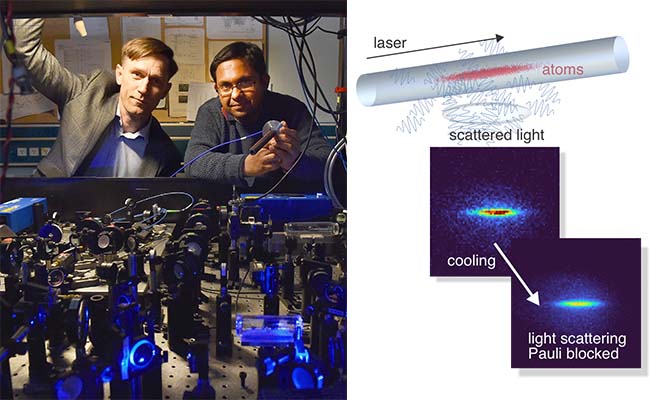 Outstanding Otago research about the scattering of light has been published in respected international journal Science.

Dr Amita Deb and Professor Niels Kjærgaard, of the Department of Physics, showed how gases made up by so-called fermionic atoms stop scattering light when cooled to very low temperatures. The effect is a manifestation of Pauli blocking, which forbids fermionic particles to enter the same quantum mechanical state.

Theirs is one of three international studies published in this week’s issue of Science which observe, for the first time, suppression of light scattering off an ultracold Fermi sea, a previously theorized phenomenon.

“It is a really beautiful result of high importance to physics, not because it will revolutionise our world – at least not in the near future – but because it finally demonstrates an effect predicted long ago which is really difficult to see in experiments. It’s the kind of work that will end up in textbooks.”

Head of Physics Professor Blair Blakie says having a paper published in Science is a “big deal”, but to have just two authors and for them to both be from Otago is “quite outstanding”.

He acknowledges the work may be challenging to convey to the general public but says the experiment itself is amazing and people will be “blown away” by what is achievable in a physics lab.

“It is a really beautiful result of high importance to physics, not because it will revolutionise our world – at least not in the near future – but because it finally demonstrates an effect predicted long ago which is really difficult to see in experiments. It’s the kind of work that will end up in textbooks.

“This work is about light scattering by an extremely dilute and extremely cold gas. Some might think a gas is almost nothing, so light would just pass through it unaffected, but a small amount actually scatters.

“We usually don’t notice it in our everyday experience when we turn a light on in a room, but on larger scales it can be observed. For example, light scattering from the atmosphere gives us the phenomena of blue skies during the day and beautiful colours at sun set,” Professor Blakie says.

Dr Deb and Professor Kjærgaard established an experimental scenario where all low-energy quantum states of a fermionic gas are occupied by exactly one atom – a so-called Fermi sea. With all places taken, scattering events, requiring an atom to recoil to an occupied spot, becomes forbidden by the Pauli exclusion principle. As a result, when the Bengali-Danish duo passed a laser beam through the gas, they observed how it would cease to scatter photons.

This curious Pauli blocking phenomenon was predicted theoretically over 30 years ago and has now been seen for the first time.

“By shining laser light on small clouds of potassium atoms we found that as the clouds reached temperatures in the nanokelvin domain, the transmission of light would gradually go up while the sideways scattered light would be suppressed,” Professor Kjærgaard says.

While the probe laser beam would not be attenuated by propagation through the atomic Fermi sea, the Otago experiment showed the transmitted light wave would still be delayed while passing through the gas.

“Glass, for example does not diffusely scatter light, and yet delays the propagation of light through its refractive index. This is what make spectacles work.”

Atomic gases also possess a refractive index, but under normal conditions this would always go hand-in-hand with diffuse scattering of light.

“Our study shows that entering into a Fermi sea state largely leaves the refractive index unaffected while dramatically reducing light scattered out of a probe laser beam,” Dr Deb adds.

The findings might be exploited in emerging quantum technologies based on atoms, such as neutral atom quantum computers, where Pauli blocking would protect atomic systems from adverse light scattering effects.

The other two groups to make equivalent observations are from MIT, and JILA at the University of Colorado – both in the US and both considered world-leading institutions for atomic physics.

“I think it is amazing that our local effort of two scientists has achieved a high impact result matching the extremely well-funded larger teams at the top institutions in the USA – this is kind of like turning up to the America’s cup in a dinghy and keeping up with Team NZ,” Professor Blakie says.

The publication, Observation of Pauli blocking in light scattering from quantum degenerate fermions, can be found here: 10.1126/science.abh3470