Luminescence was a public event run by physics postgrads from the University of Otago, in Queenstown, on 27 June 2016. The event was  part of The Dodd-Walls Centre 9th Annual Symposium and was themed to celebrate science of light by showcasing demonstrations featuring fluorescence, reflection, optical illusions, coloured shadows and much more. It was organised and sponsored by the University of Otago's Department of Physics, in collaboration with Quantum Science Otago, the Otago Museum and Catalyst Trust. For the larger part of the event we engaged with kids from local schools. We were also open to the general public on the evening of 27 June. 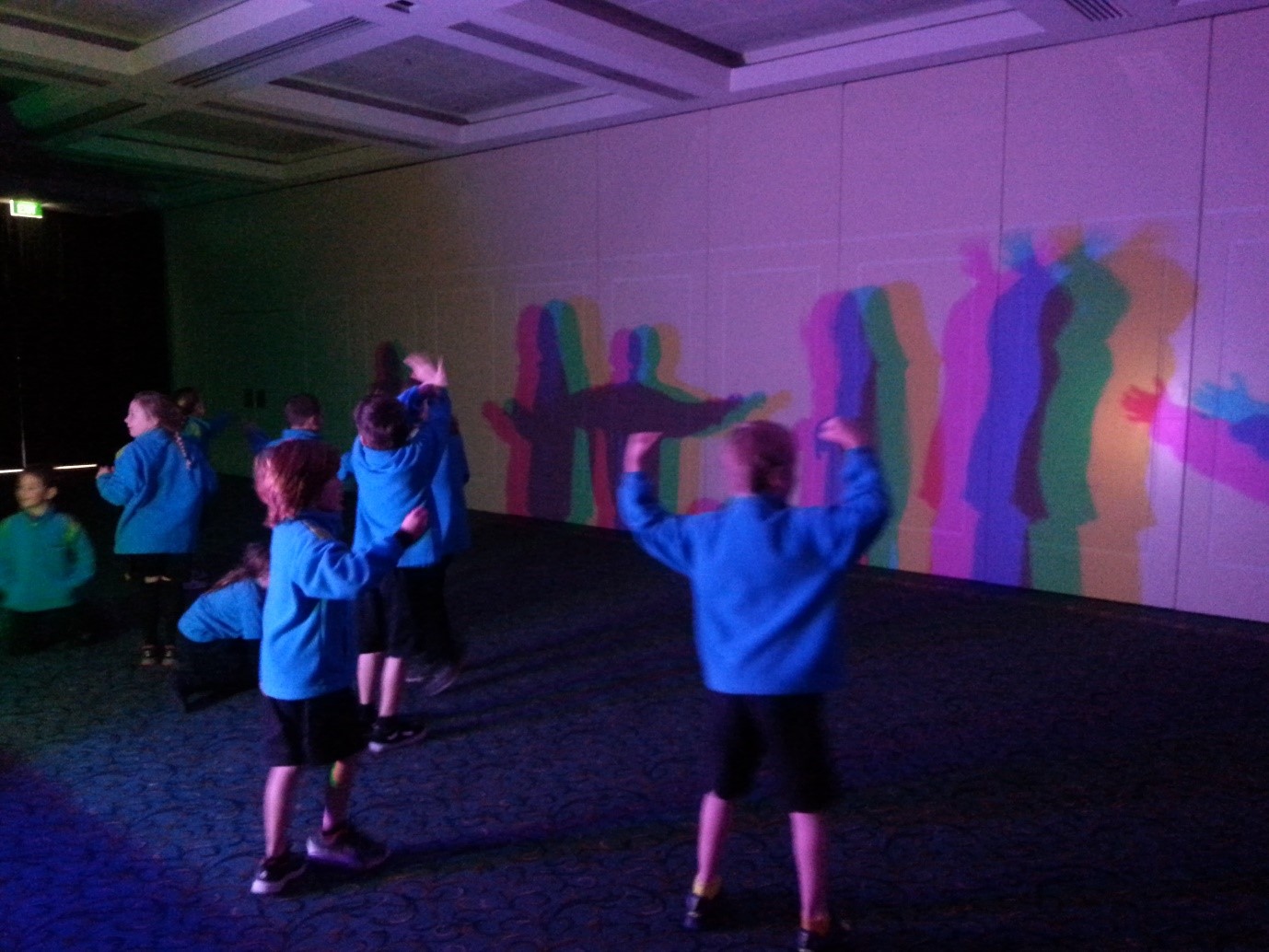 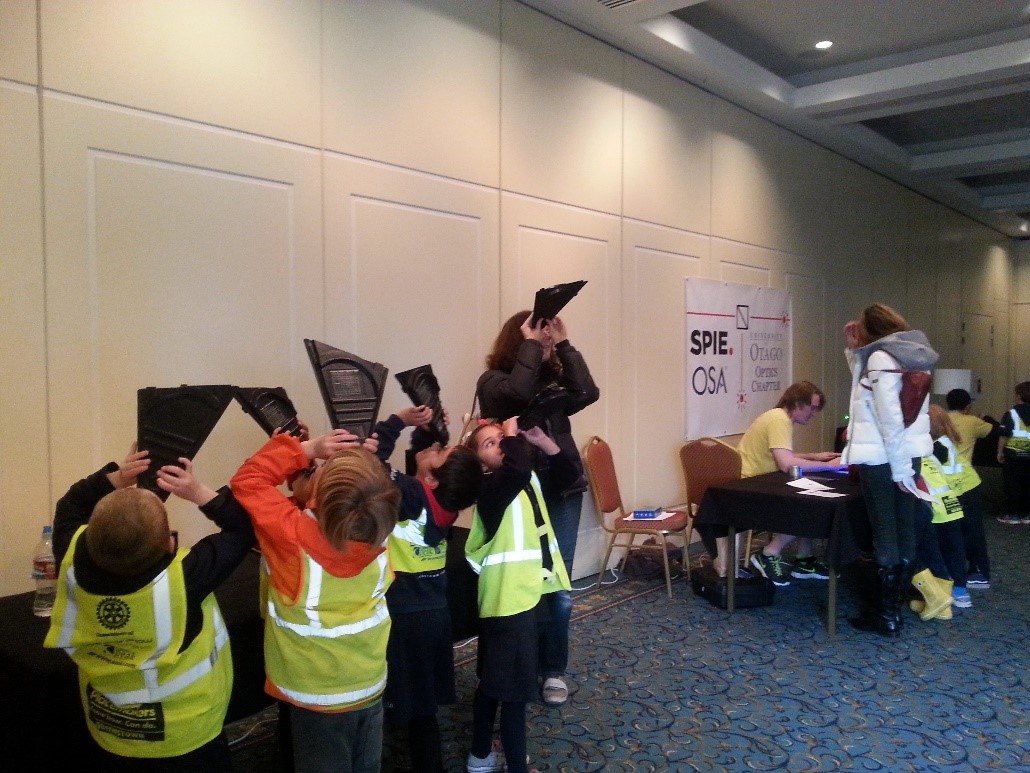 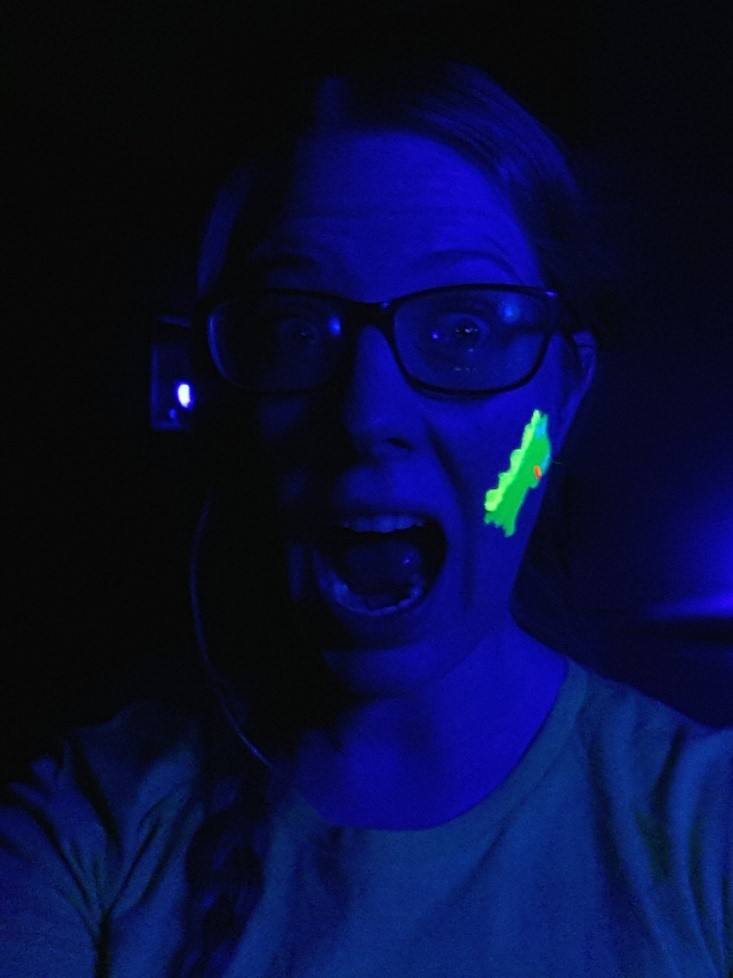 Science for Supper is a programme funded by MBIE and designed for families with children 8 years and older in the evenings. The aim of the programme is to encourage parents and their kids to ask questions about physics/science and how things work, while showing participants equipment and demonstrations that they've never seen before. Volunteers from the Physics and Chemistry department guide participants through the scientific thought process and explain how science applies to the participants' daily lives. Thus far, Science for Supper has been held in Dunedin, Mosgiel, Weston, and Blue Skin Bay with more outreaches to be announced. For volunteering opportunities, please contact Noah Hensley. 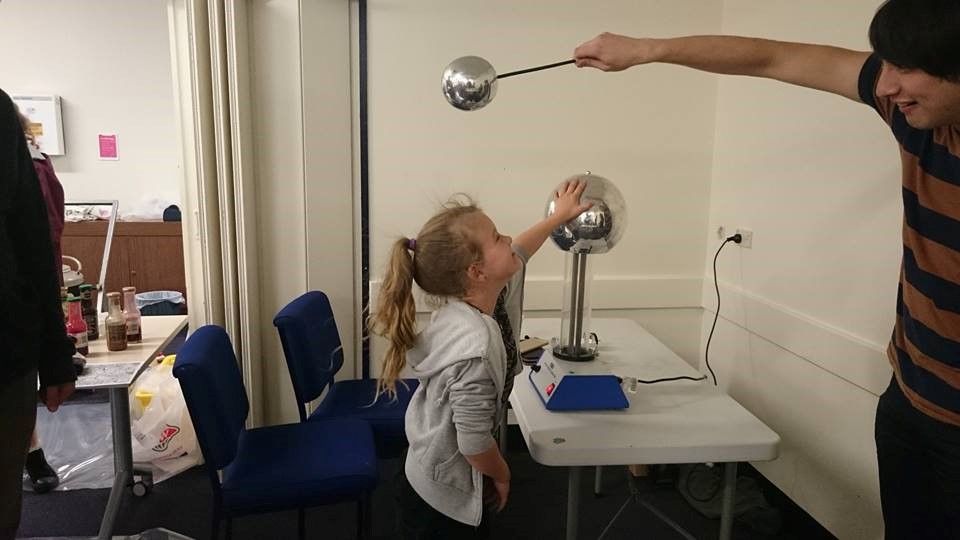 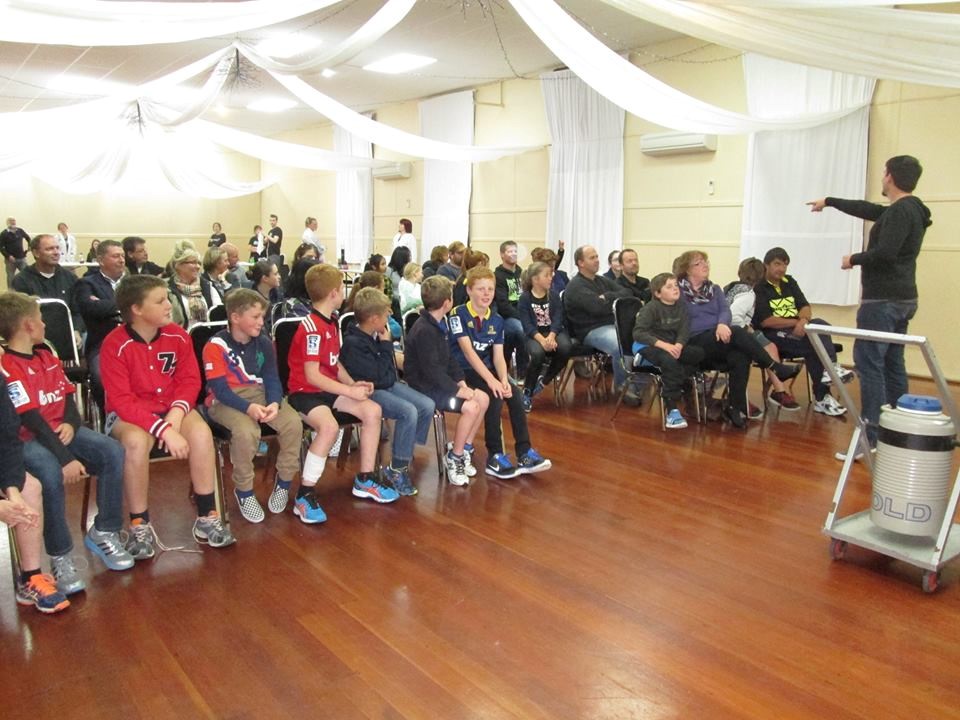 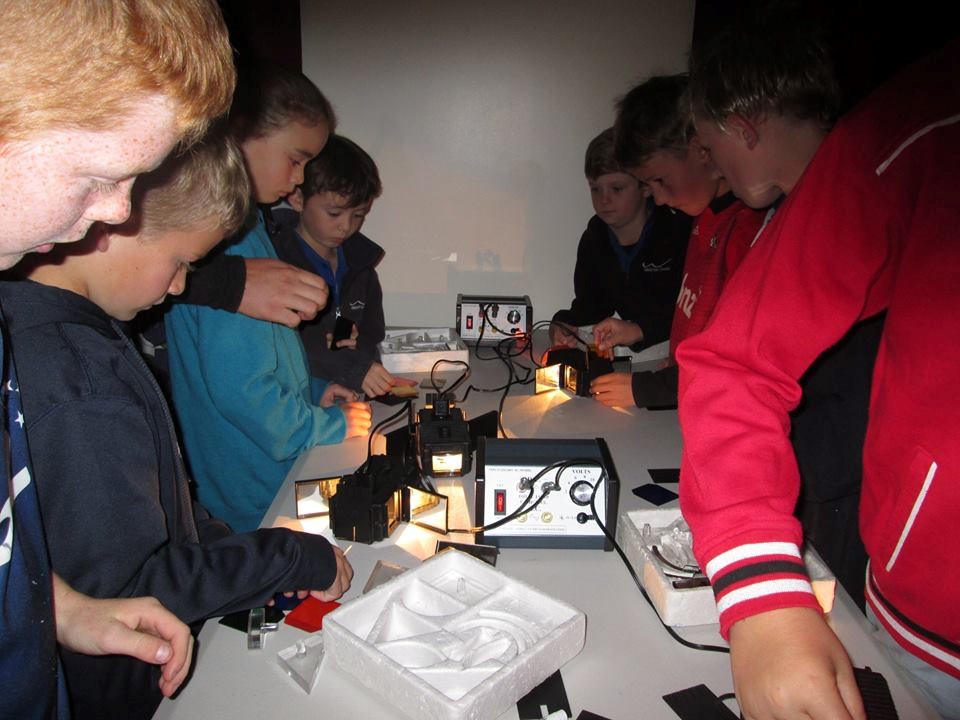 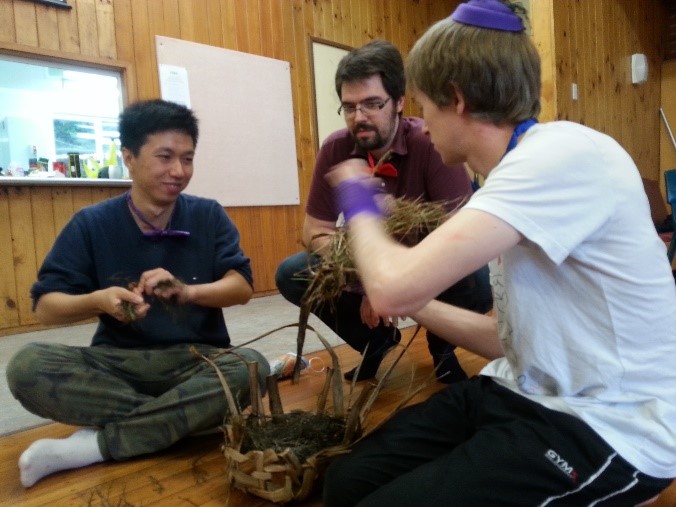 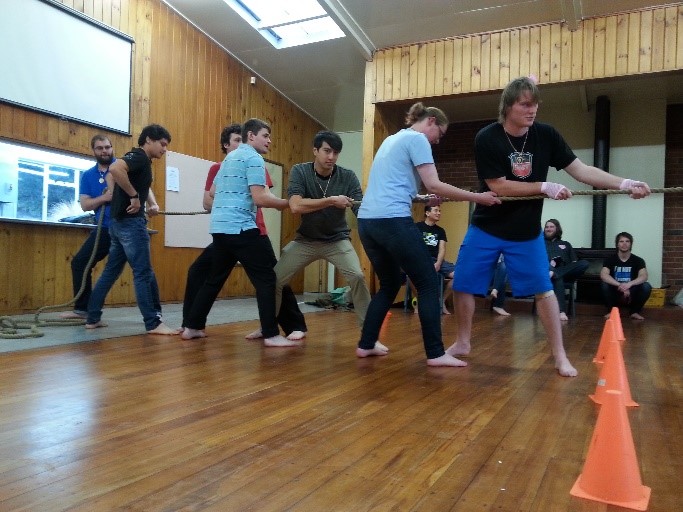 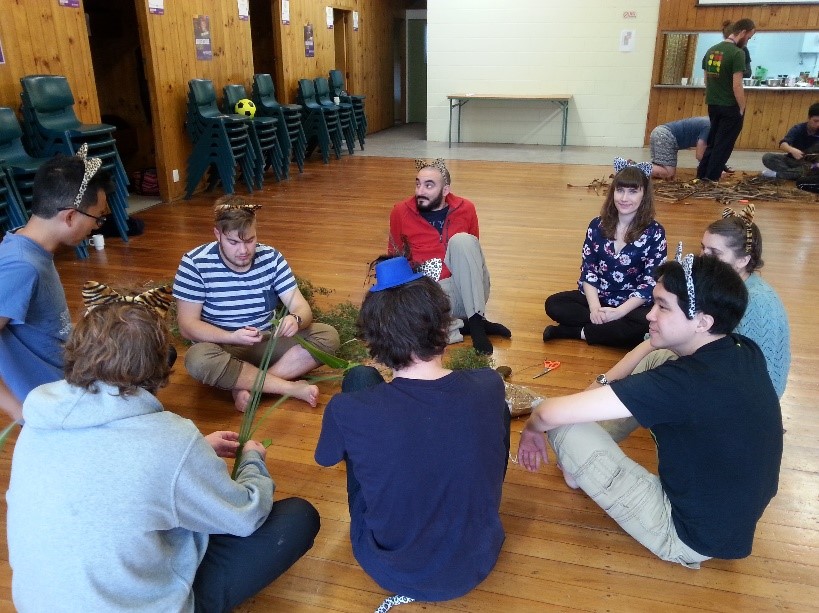 This year the retreat was held at Waiora Scout Camp, Silverstream Valley. 37 postgraduate students participated and competed in various activities like quiz night, tug-o-war, tower construction and egg drop survival. There also were "soft-skill" workshops on topics like "An academic career: the other stuff", "How does a scientist transfer their skills outside of academia" and "Surviving as a science graduate in a late stage start-up". The event offered a great opportunity for new members of the postgrad family to get to know other fellow students while roasting marshmallows by the campfire. 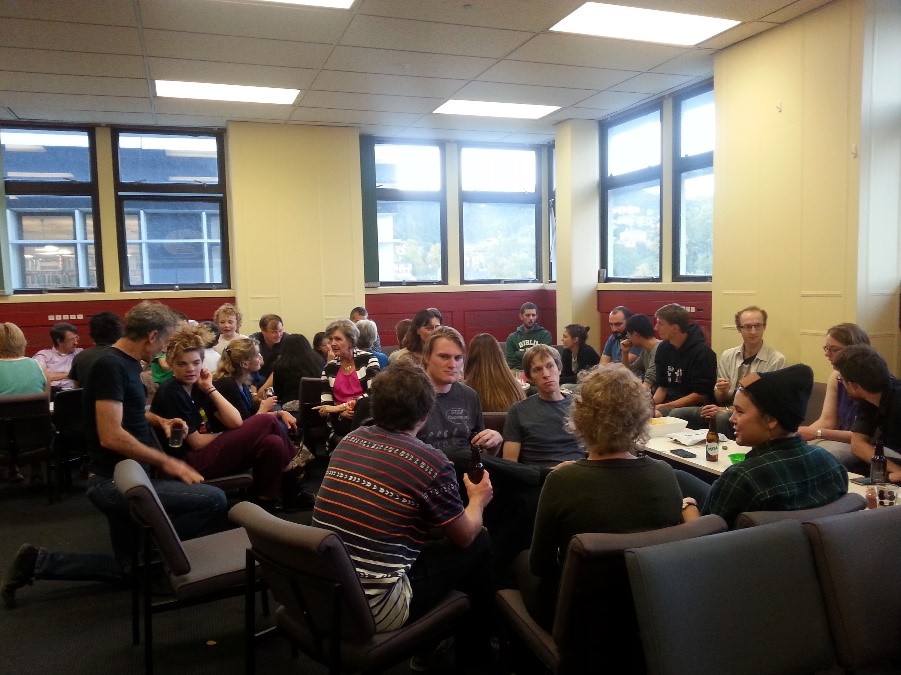 This semester happy hour was organised on a Friday evening and students and staff from Math, Statistics and Physics got together to relax, socialise and enjoy cheap drinks, free snacks and soft drink, and a great time.

The science communication team at Otago Museum invited the physics postgraduate students to a meet and greet event on a Friday evening. About 15 of us went along and got to see a show in the new Planetarium, followed by drinks and pizza. We discussed our outreach work and possible future collaborations, including the Lab-in-a-box programme. It was a lot of fun and great for everyone to meet the team at the museum, plus there were lots of great ideas for future work together - watch this space!

Otago Optics Chapter president and Physics PhD student, Bianca Sawyer, attended the International Year of Light Closing Ceremony in Mérida, Mexico where she joined a group of 28 students from around the globe who were volunteering at the event.

During the three day event, over 300 participants came together to review the major outcomes of the IYL 2015 and discussed potential legacies of the initiative. Some of the 5,000 activities that were held in 148 countries were highlighted, along with lectures and panel discussions by eminent specialists, including two recipients of the Nobel Prize in Physics: Shuji Nakamura and John Mather. Topics included health and life science, architecture and urban environments, new light sources for research, optics and photonics, cultural heritage, light pollution awareness and science education.

The ceremony was officially closed with a visit to the archaeological site Chichén Itzá, where participants learnt about the ancient Mayan culture and its knowledge of the Universe with two talks from prominent archaeoastronomers as well as a light and sound show over the Temple of Kukulcan. 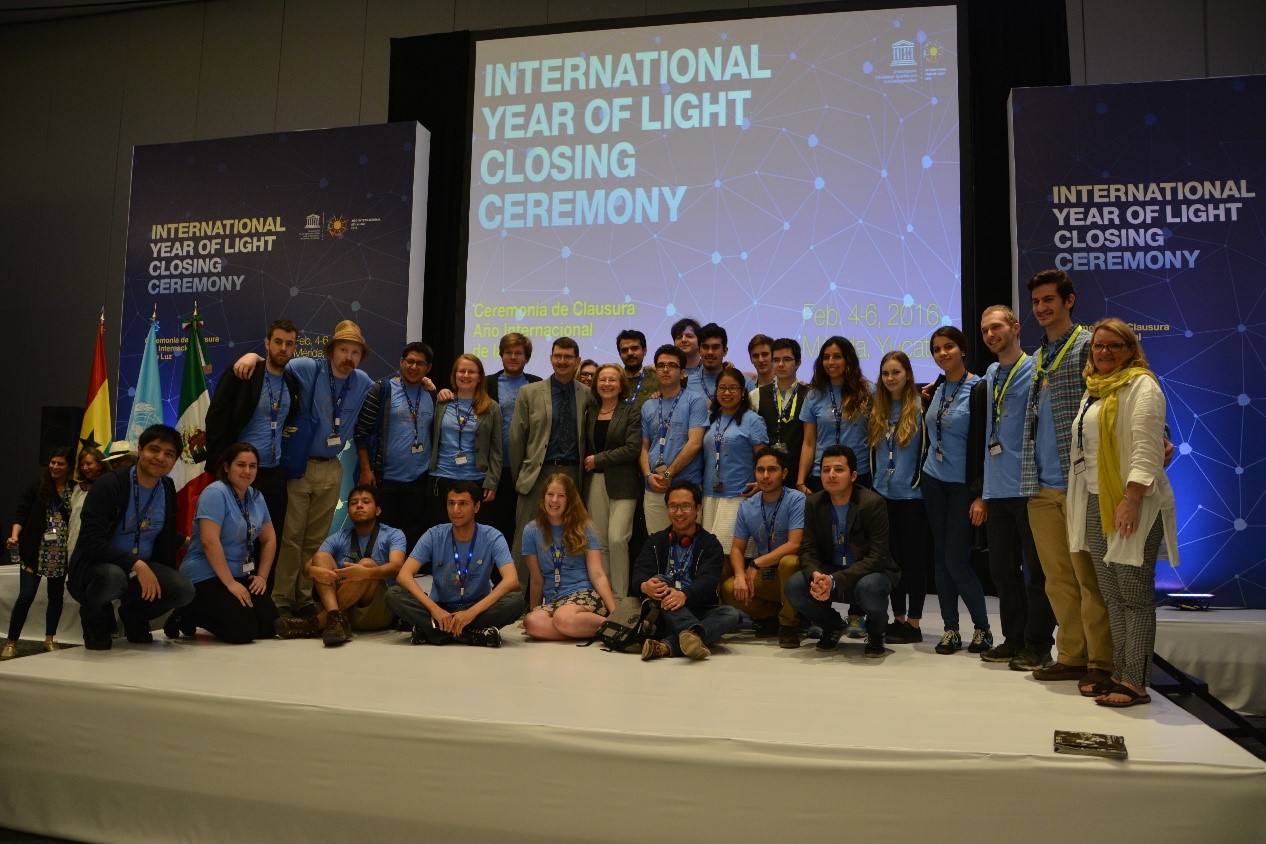 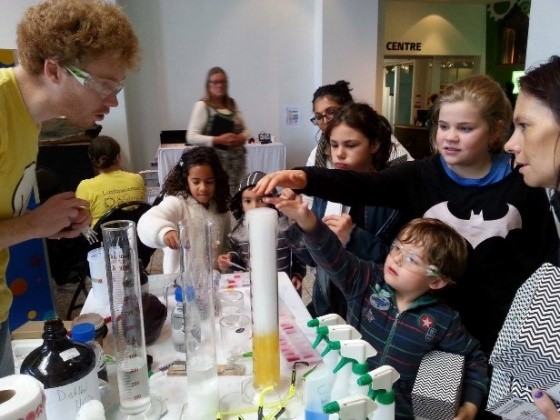 In the wake of Luminescence, we were asked by the Otago Museum to help run a series of light-themed demonstrations during the closing event of a nation-wide series of outreach events called Te Koanga. Our students manned a range of light-themed interactive stalls, Light Matters Outreach Kits were handed out, and there was a repeat of the Luminescence series of talks on light and exciting light-based research being done at the University of Otago! The event was held at the Otago museum and attracted about 500  attendees from the Dunedin community. 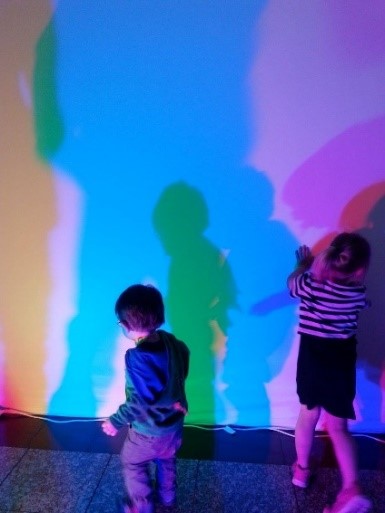 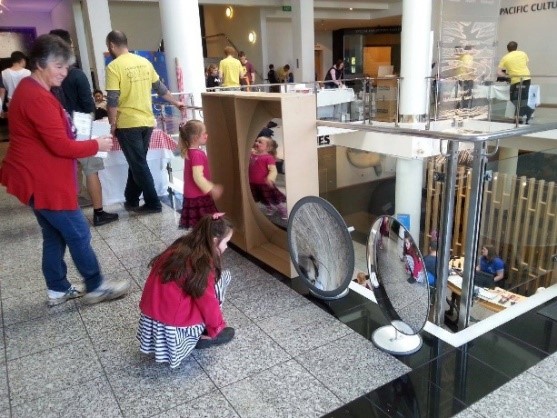 The Otago Optics Chapter and other physics department students ran a day long community outreach festival to celebrate the International Year of Light 2015. Luminescence consisted of a wide range of interactive demonstrations on concepts and technologies involving light and a series of public lectures by University Professors aimed at ages 12+ on what light is, how it creates phenomena such as sunsets and rainbows, how it behaves near black holes, and how it can be used to manipulate atoms, discover exoplanets and probe brain function. The event had a range of activities that were fun and engaging for all ages. Favourites amongst the kids were rainbow shadows, a laser maze and kaleidoscope making. Older attendees enjoyed stalls on spectroscopy, fibre optics, the human eye and more! 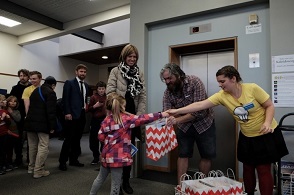 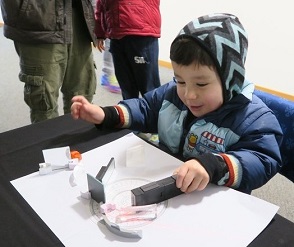 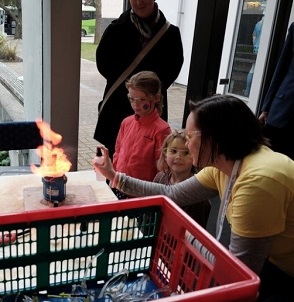 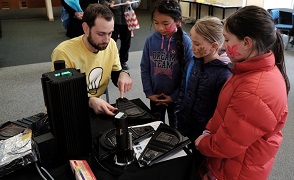 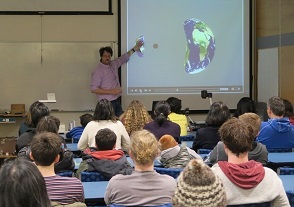 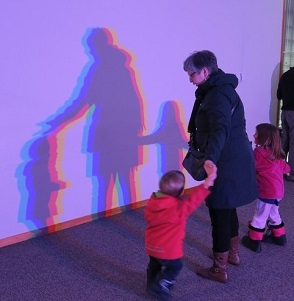 There was also an exhibition of the entries of our Luminescence Photo Competition that asked entrants to capture a photo showing the beauty and behaviour of light and how it is important in our world. We got some really incredible entries and a selection of them, along with all the winners, can be viewed here.

The event was generously sponsored by SPIE, OSA, the Otago Physics Department and Quantum Science Otago.

This year's Retreat went ahead on the weekend of May 1-3, at Berwick Lodge Camp. We had 25 attendees and, as usual, the weekend was a hugh success! This year the teams wore different types of head bands during the team activities, which proved to be a good way to tell the groups apart. The activities were the initial team building relay, a confidence course, a quiz night, the construction of a costume for a masquerade ball, and the construction of a glider to test the teams' engineering skills. Professional development workshops for 'soft skills' were held on the Saturday afternoon with a varied range of presenters: a postdoctoral fellow on translating academic research, two experienced academics on grant writing and publishing, an academic on exploring research careers outside of academia, and the student international services manager on supporting students to succeed. 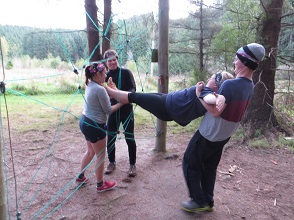 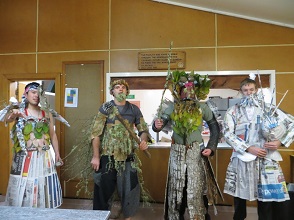 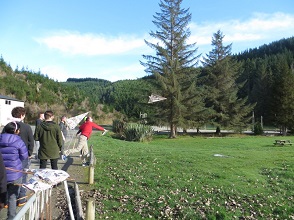 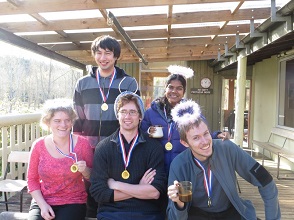 The postgrads organised our bi-annual Science 3 Happy Hour, where all members of the Physics, Maths and Stats departments (staff and postgrads) are invited to enjoy cheap drinks, pizza and other snacks as a social way to round up another busy week!

The postgraduates hosted a social gathering with 5 short-listed new lecturer candidates who were visiting the Department. This provided the candidates a chance to meet the postgraduate students and postdoctoral fellows in a relaxed setting and to ask questions about life in Dunedin and life as a student/postdoc here in the department.

Taking casual Friday to the next level, staff and students came to the department dressed in their onesies. There were cats, polar bears and penguins roaming the halls. At 5pm the common room became a bar for happy hour. With cheap drinks, pizza, and comfy onesies all around, it was an awesome way to finish the week. 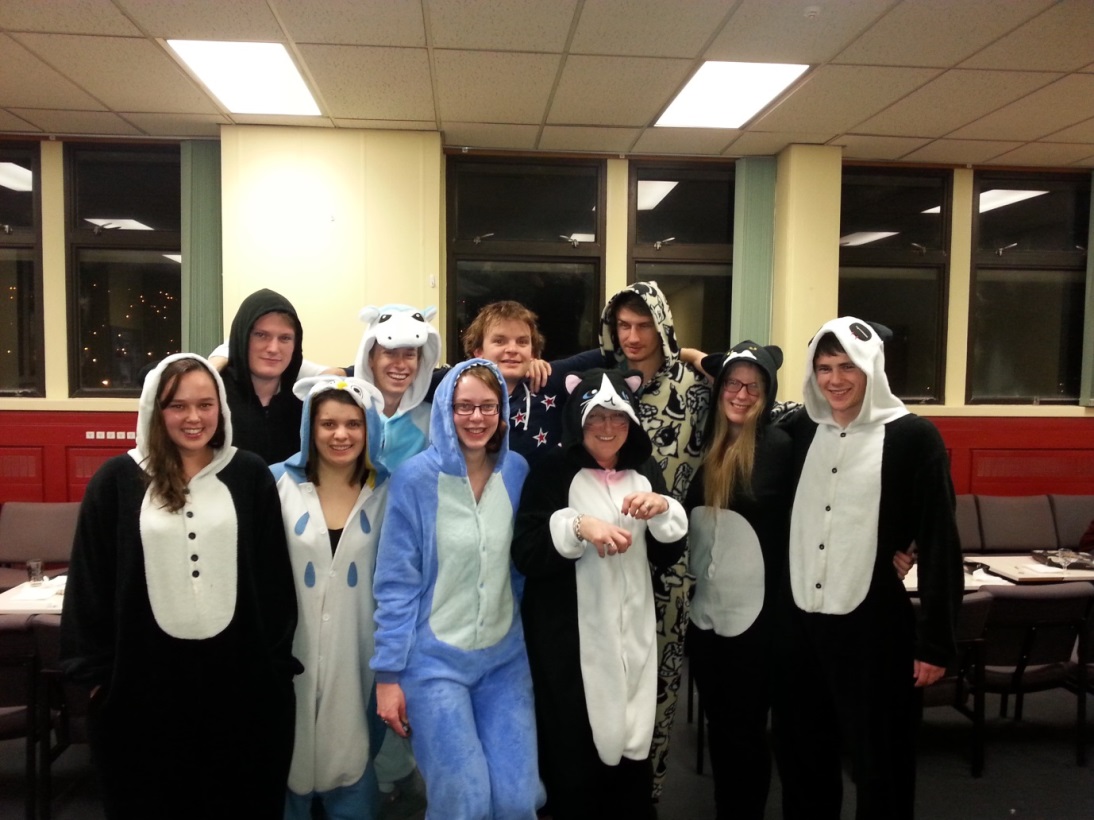 04/04/2014 - OSA Members Recruitment Pizza Party and AGM
Just like last year, the Optical Scoiety of America (OSA) Student Chapter's AGM doubled as a recruitment event. About 20 students attended, a lot of which became new members. A new executive was elected, and everyone enjoyed the pizza and drinks on the balcony of the Physics Common Room. A flash design for member shirts was revealed, and many members ordered themselves one. 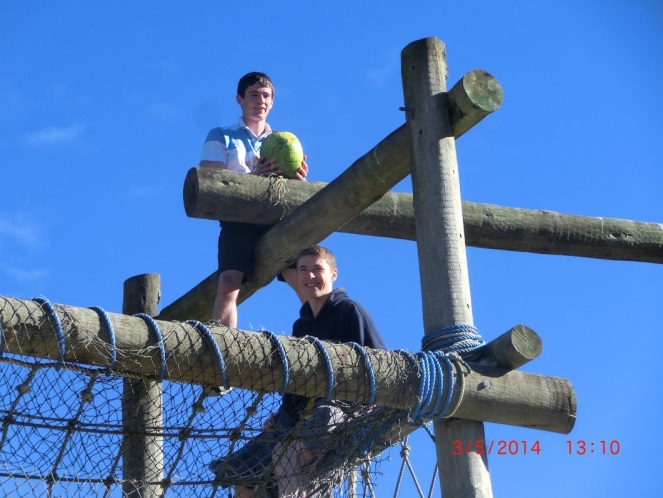 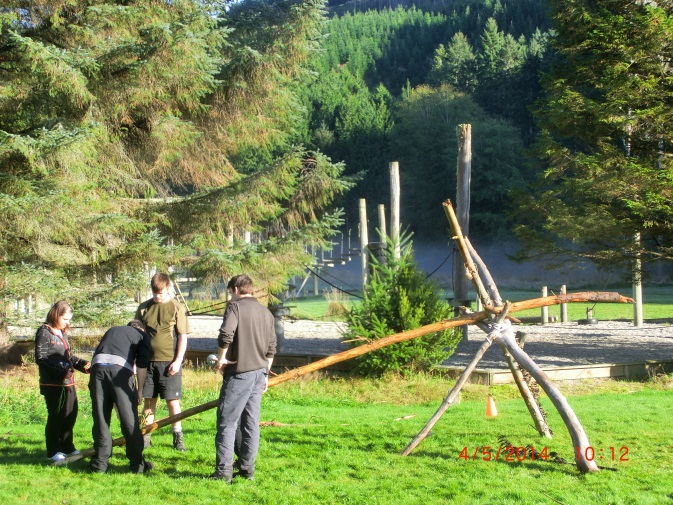 This year's Retreat went ahead on the weekend of May 3rd, at Berwick Lodge Camp. we had 26 attendees and, as usual, the weekend was a huge success! Watermelon mascots were fiercely guarded by the 4 teams as various challenges were completed. These included a set of team building activities and a confidence course, a quiz night, "capture the mascot" and a catapult building/firing competition, with the winning pumpkin being flung 30m by Black team! Professional development workshops were held on the Saturday afternoon with a varied range of conveners: our department's two new professors, a former electronics student who has just begun his own company, a staff member with extensive experience with grants and scholarships, and the manager of the graduate research school.

Throughout 2013 - Rutherford Shield Challenge
Rutherford Shield is a friendly annual competition between Physics and Chemistry Departments. This year three events have been completed: Indoor lawn bowls, pool and soccer – with physics coming out on top in all three!!

2/9/2013 - Undergrads meet postgrads pool night
Another social pool night was held to help build relationships between the postgraduate and undergraduate students. Pool tables and nibbles were supplied and this year we included a friendly round-robin tournament, which was won by the “Biggie-Talls”. 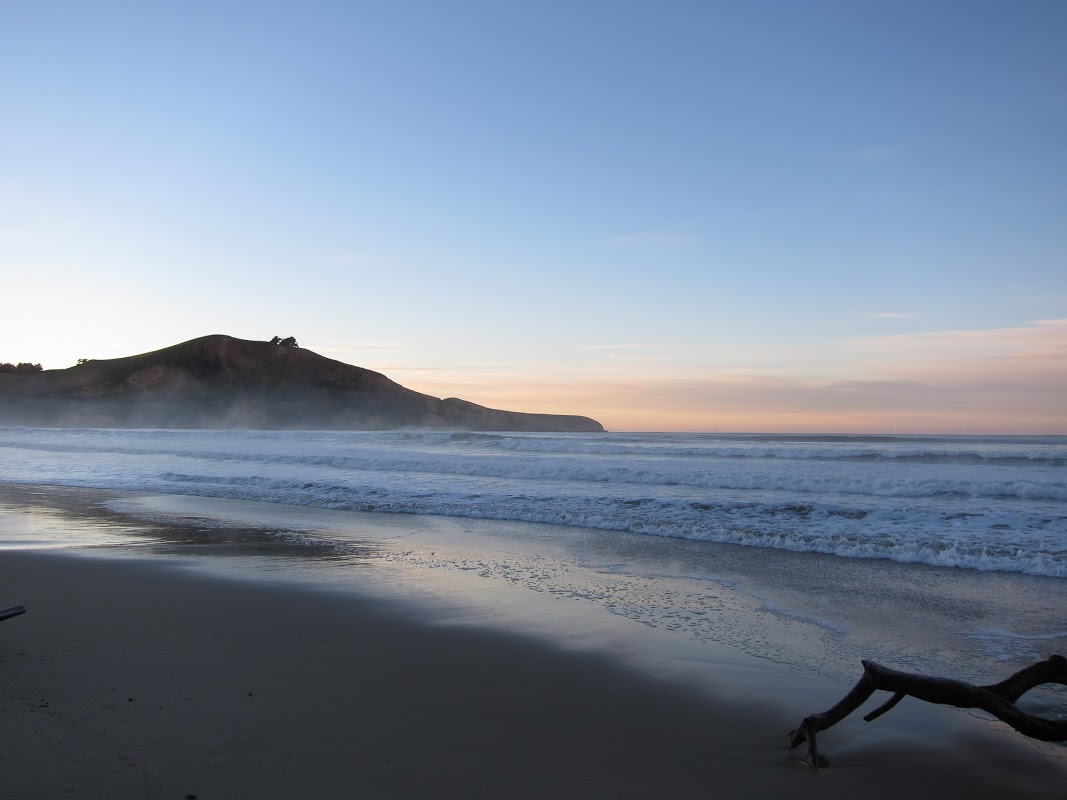 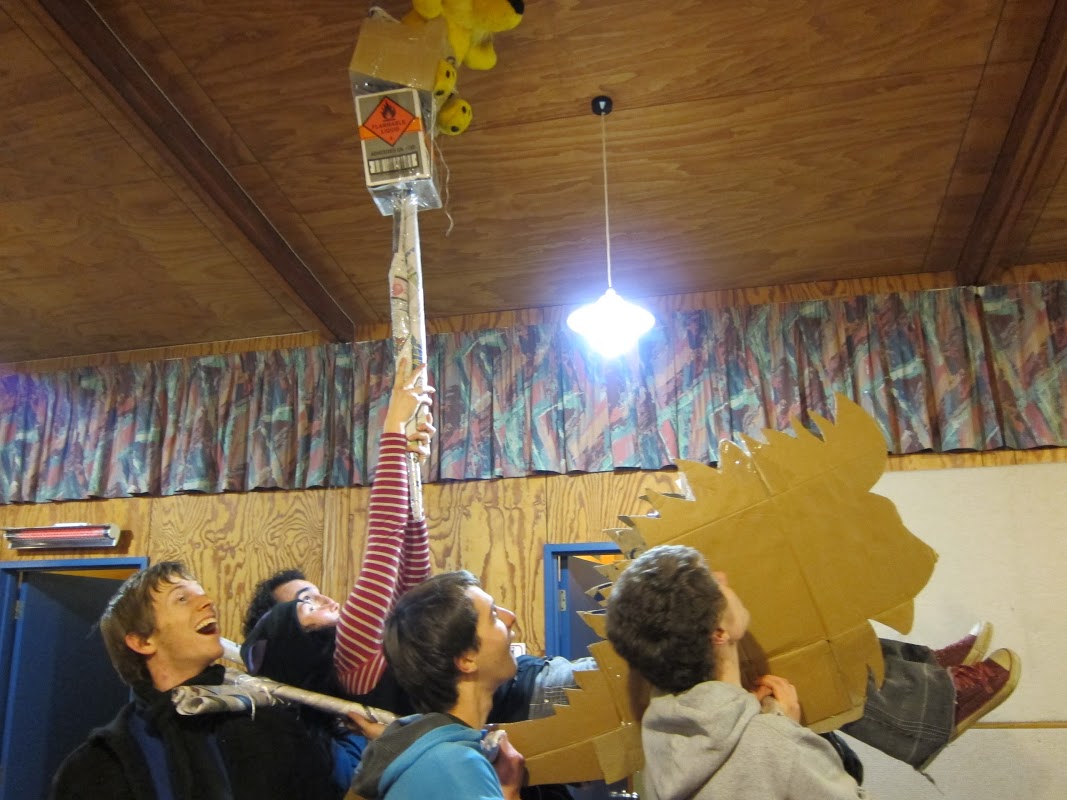 This year the retreat was held at Sidey Outdoor Centre, Waikouaiti. 28 participants were divided into 4 groups and competed in various activities. Workshops and walks were organized too. It was an enjoyable social weekend with camp fires at night. The retreat mascot – The Armadillo, made a return this year. 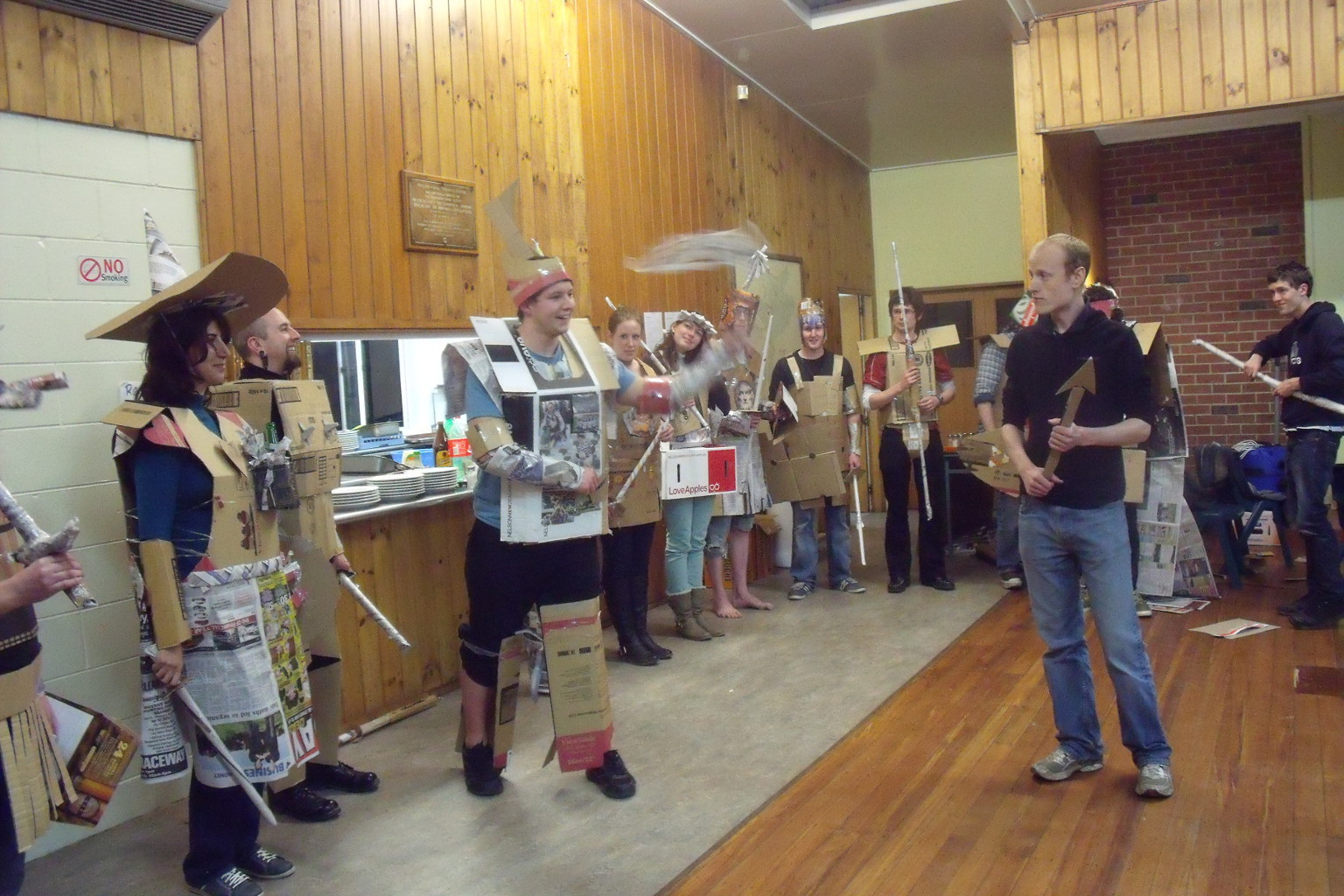 The retreat was held at Wairoa Scout Camp, 30 minutes drive from town. This year featured a KAOS style battle on Saturday evening.

Left: At the 2012 Retreat: Entrants model their cardboard and newspaper armour before the Battle.

28/5/2010 & 1/10/2010 - Happy hour
Happy hours are awesome. Always organised by students, the entire Science 3 building meet for a night of 1980's drink specials and dirt cheap pizza. Held in the common room they are the best way to let your hair down without even leaving the department.

16/4/2010 - 18/4/2010 - Postgraduate Retreat, Tautuku, Catlins
The second ever postgraduate retreat was a raging success. Held in the stunning Catlins, postgraduates and postdocs were entertained with a weekend of camp fires, tramping, games and general lounging about without having to worry about work. The idea was to give people a chance to get to know each other outside of the department and perhaps add a name to the familiar faces you tend to walk past in the corridor each day.