As a young man growing up in England’s gritty North East the future seemed proscribed for the School of Physiotherapy's Steve Tumilty. 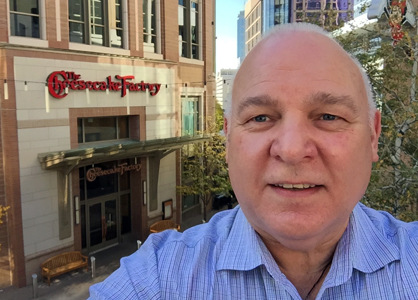 The once-bustling coal mining and shipbuilding city of Sunderland was in steep decline by the 1970s. Trains, ships and factories were no longer powered by steam or fired by coal; and the mega shipyards of Korea and Japan were on the rise.

Tumilty's school careers adviser offered him a stark choice. He could tackle a hardscrabble working life at the coalface, or help construct the last of Sunderland’s shipping fleet along the River Wear.

He would choose instead a more intrepid life as a communications specialist in the British Army, before becoming a computer engineer.

After a patella injury, Tumilty's treatment by a military physio inspired him to take a good look at the profession. Nine years later he enrolled to study physiotherapy at Northumbria University in Newcastle.

Asked to describe a memorable event in his physiotherapy career Tumilty mentions his pride in gaining his PhD at Otago.

While his success as an academic and researcher is hard-won, it was not achieved by individual effort alone.

"Everyone should have the same chances and opportunities, but this is not a one-way transaction. Set goals and never give up on them"

The high standards Tumilty sets for himself and his students derive from his strong belief that nothing in this life can be taken for granted.

“Everyone should have the same chances and opportunities, but this is not a one-way transaction. Set goals and never give up on them”

Unafraid of challenges, he ran his first half marathon at the age of 48.

"I had a chest infection for two weeks leading up to the race and found I couldn't even climb one flight of stairs. But I recovered well enough to make a start and to finish in a respectable time"

“Everyone should have the same chances and opportunities, but this is not a one-way transaction. Set goals and never give up on them”.

Tumilty immediately made his way to the physiotherapy tent where he collapsed (with some humility) onto a massage table.

“After some expert massage from some of my own fourth-year’s I felt terrific!”

Tumilty’s research at the School of Physiotherapy seeks to answer questions generated from clinical practice.

Orthopaedic manual therapy combined with exercise prescription and advice remains at the heart of ‘orthodox’ musculoskeletal physiotherapy and pain management but what are the effects of direct and indirect modulation on the healing process when dealing with the results of injury-related stresses on the human body?

Until recently the biomechanical dimension has been considered the primary mechanism of effects, yet a growing body of evidence suggests that non-biomechanical factors are in fact, predominant. ‘Non-biomechanical factors’ describes these specific responses and their effects on the body’s autoimmune and neuroendocrine systems. Sociological factors, such as the individual patient's working and living environments also play a part. 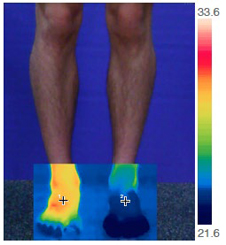 Infrared imaging can provide a body of empirical information about each patient’s unique individual characteristics and physical history. At times, local production of catecholamines at the site of pain overstimulate the sympathetic nervous system. The resulting vasoconstriction can last much longer than necessary. Lack of blood flow and a decrease in temperature is detrimental to the healing process and must be rectified. In this instance, this was detected via thermal imaging and corrected with a thoracic spinal manipulation which modulates the autonomic nervous and neuroendocrine systems to restore normal blood flow and temperature, then appropriate physiotherapy treatment can begin.

Under physical or psychological stress, our bodies produce cortisol as we respond to innate ‘fight or flight’ signals. Driven by complex biochemical processes, feedback mechanisms engage the branch of the human autonomic system known as the ‘sympathetic nervous system’ which, at times can result in autonomic dysfunction and a failure to recover.

Tumilty’s current research interest explores ways in which a musculoskeletal and manual therapy approach can utilise these non-biomechanical effects to complement the body's complex healing and remodelling processes.

Growing links with China and Japan

His team has established Memorandums of Understanding with three Japanese universities to foster the exchange of staff and students.

Two Otago Masters graduates, Masa Aoyagi and Takayuki Myamori are now faculty at Japanese universities and the ongoing synergies between the School and alumni is key to the future development of such international linkages.

In recent discussions with peers in China, Tumilty sensed a real willingness to help build formal collaborations, and while he is upbeat about the opportunities he remains honest about the demands. He realises that it takes considerable time and effort to create and foster long term connections.

Steve Tumilty’s investigations into how non-biomechanical factors operate the body's complex healing and remodelling processes provide him with opportunities to give back to his well-chosen profession of physiotherapy as a teacher, researcher and valued mentor.