Internationally renowned physiotherapist Dr Stanley Paris received an honorary degree of Doctor of Laws from the University of Otago on Saturday, 19 August, 2017. 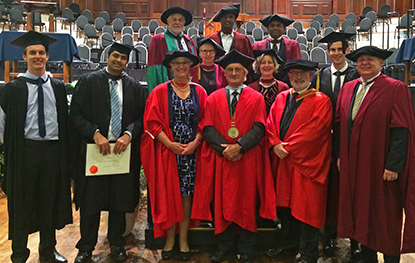 Dr Paris, who graduated from the New Zealand School of Physiotherapy in 1957, is a pioneer in manual and manipulative physiotherapy, an endurance athlete and a noted philanthropist.

He attended Otago Boys’ High School and then completed studies at the School of Physiotherapy before gaining a scholarship which took him to Europe and North America in 1963 to investigate the treatment of backache. On his return to Dunedin he instructed at the School and entered private practice with his father.

Dr Paris began teaching courses in the area to colleagues in New Zealand in 1964 as well as writing his first book “The Spinal Lesion” and he has gone on to publish more than 40 articles in physical therapy, medical, and osteopathic journals.

In 1975, Dr Stanley Paris became the founding president of the University of St. Augustine for Health Sciences in Florida, which now has campuses in California, Florida and Texas.

Alongside his professional interests, he is an athlete and adventurer. Dr Paris has the ambition to become fastest (and oldest) person to do a solo circumnavigation of the globe by a cruising yacht, in further support of the Foundation for Physical Therapy in the US, to which he and his wife Dr Catherine Patla gave a $3 million gift earlier this year.

Read more about his adventures and plans here ...