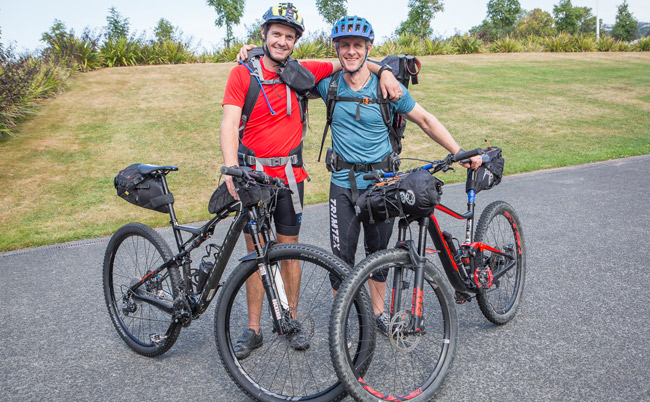 Professional Practice Fellows in the School of Physiotherapy, Matt Dick and Chris Higgs, are both participating in this year’s gruelling multi-day adventure race, GODZone - albeit in different teams. However, the only competition will be within their own selves.

“We both have the same goal, and that’s to finish the race,” Mr Higgs, who is also Clinical Programme Education Lead in the School of Physiotherapy, explains.

GODZone is not for the faint-hearted. Labelled as the most technically challenging adventure race in the world, the men have to traverse about 600km in and around the Akaroa peninsula and Canterbury high country within a seven day deadline. They will be biking, packrafting (aboard an inflatable boat with their packs), hiking, running, kayaking and orienteering on as little sleep as possible.

"We’re just hoping we can complete it and still be talking to our other team members at the end."

“Competing against each other is not our attitude,” Mr Higgs says. “We’re just hoping we can complete it and still be talking to our other team members at the end.”

One of the unique attributes of GODZone is the fact that specific details of the course and maps remain secret until a few hours before the event starts.

Competitors are provided with a logistics planner about a week before the start, so the teams can organise their gear and food into some kind of order. Mr Dick explains that this alone is a logistical nightmare.

“It works out that you need to consume about 1 gram of carbohydrate a minute and when you put all of that together, that’s a lot of food.

The competitor’s movements can be tracked live online and Mr Dick admits he became hooked watching a friend compete in last year’s event. So, when that friend asked whether he would be interested in competing this year, he decided to take up the challenge.

"We need to highlight the support of family and friends to enable us to do this – that’s massive; the time commitment, the cost and compromise involved is huge."

Mr Higgs has been competing in 24 hour adventure races over the past few years and says GODZone was on his bucket list of events to do and this year the stars aligned to make it a reality.

Both men paid tribute to their wives, families and friends to enable it to happen. Matt has five young children and Chris has three, so taking time out from family life to train is not easy.

“We need to highlight the support of family and friends to enable us to do this – that’s massive; the time commitment, the cost and compromise involved is huge,” Mr Higgs says.

Lecturer in the School of Physical Education, Professor Jim Cotter, has provided some advice and mentoring to the pair.

The race begins this Sunday 10 March and the men currently admit a feeling of “nervous excitement” as race day looms.

Matt is a member of team #5 KiwiHarvest, representing a local food rescue business, while Chris is in #25 Kai Whakapai Wanaka, representing the iconic Wanaka café. GPS tracking enables the teams to be followed live on the GODZone website: https://godzoneadventure.com/