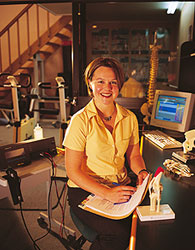 Rachael Dyche literally fell for physiotherapy in her last year at school. After a fall she had to have physiotherapy - and she realised that was the career for her.

"I always wanted to do something where I was up on my feet as well as using my brain," says Dyche. "And physio is a great mix of science and people skills."

There was never any question about where to study. "Otago is definitely known as the best university to be at," she says. "It's not just going to university. It's the whole cultural scene as well. And it lives up to its reputation. Absolutely, and then some."

Dyche practised in New Zealand for three years before working overseas in the UK and Germany and finally returning to buy her own practice in Timaru.

"It was a really great opportunity to branch out to run a business as well," says Dyche. "Having my own business is good because I can structure our treatments and services around what I think my clients need rather than having to fit the type of treatment I do into someone else's system.

"You need to be a people person in physiotherapy. And Otago is great for bringing that out in you too!"