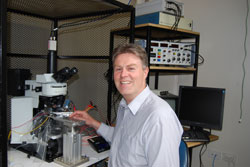 Otago physiologist Professor Allan Herbison has been awarded the Health Research Council's prestigious Liley medal in recognition of his groundbreaking research into how the brain controls fertility.

Professor Herbison, of the Department of Physiology and Centre for Neuroendocrinology, has been honoured for his outstanding work, which involves a breakthrough that may lead to new treatments for infertility.

His research yielded significant findings which show that a protein molecule called kisspeptin plays a crucial role in triggering ovulation.

Professor Herbison said he was honoured to be awarded the Medal for an outstanding contribution to the health and medical sciences in the field of neuroscience and neuroendocrinology.

His research, published in 2008 described the process by which a small group of nerve cells in the brain, called gonadotropin-releasing hormone neurons, are activated, thereby triggering the hormone surge that leads to ovulation.

This study, involving his laboratory in Dunedin and collaborators in Cambridge, used an elegant experimental design to show an essential role for a small protein called kisspeptin and its receptor, GPR54 in the process.

While kisspeptin was known to be involved in the initiation of puberty, its newlydiscovered role in the brain's control of ovulation suggests new targets for therapeutic intervention in the treatment of infertility and in contraception.

"This is an exciting finding, as people have been trying to find out precisely how the brain controls ovulation for more than 30 years. This work now reveals a crucial link in the brain circuitry responsible."

The study indicates that disorders affecting the signalling between kisspeptin and the GPR54 receptors will result in women being unable to ovulate.

"Targeting drugs to this chemical switch to make it work properly may help some people who are infertile, while finding compounds that can block this switch could lead to new contraceptives," said Professor Herbison.

It could also allow for ovulation to be induced in a more natural way than current therapies available to infertile women.

"Kisspeptin activity in the brain occurs at the top level of the cascade of neural and hormonal processes that eventually lead to ovaries releasing eggs," he said.

"By targeting this switch, the subsequent processes could proceed normally, avoiding the need to induce ovulation by injection of large doses of hormones themselves."

Infertility is an increasing problem for couples in western societies. Up to 20 per cent of couples in New Zealand suffer from infertility and the research team is looking at new avenues of treatment.

Kisspeptin was named in honour of Hershey Kisses, as the scientists who originally discovered the molecule were based in Hershey in the US.

HRC Chief Executive Dr Robin Olds said: "Professor Herbison had an excellent paper and his findings are important because they will show that kisspeptin may be a promising area to focus future research efforts aimed at regulating human fertility."

Professor Herbison was awarded his medal at the Royal Society of New Zealand's Science Honours Dinner in Auckland last night.