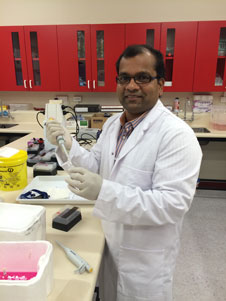 University of Otago researchers have discovered why heart disease is the number one killer of people with diabetes, a breakthrough finding opening the way for new treatments to combat the disease in diabetic patients by targeting a key protein.

Diabetes affects more than 365 million people worldwide with rates expected to double by 2030. Recent studies show that at least 60% of people with the disease die because of cardiovascular complications.

Why diabetes takes such a toll on heart health has long remained a mystery. Now, in a new study published in the International Journal of Cardiology, the Otago researchers have identified harmful molecular changes in the cells of diabetic hearts that begin before cardiovascular symptoms even appear.

They also identified that diabetes increases autophagy through activation of the protein (Beclin-1), which Dr Katare says presents “an extremely promising target for new treatments of diabetes-related cardiac disease”.

“We found that these molecular alterations begin in the diabetic heart from an early stage of the disease—before any clinically identifiable symptoms—so blocking them could be useful in combating cardiovascular complications in diabetes.”

When the researchers lowered the gene expression of Beclin-1 in rat heart cells exposed to high glucose, excessive autophagy and cell death rates were much reduced, he says.

“Given that the growing diabetes epidemic is set to create major global economic and social costs in coming decades, it is very exciting to have opened up a new research avenue that could greatly decrease the disease’s burden,” Dr Katare says.