History of the Politics Programme

In 1966, Dr J.R. Flynn, a young Chicago graduate with strong links to the civil rights movement, was appointed to the new chair in Political Studies at Otago. With Professor Flynn’s appointment, Political Studies formally separated from the History Department, ending an association of nearly twenty years. In its early years the Political Studies Department was housed in a small house on Castle St, next to History, and roughly where the Castle Lecture Theatre complex stands today. It functioned with only a small number of staff and teaching focused on political philosophy and an introduction to politics ‘with special references to New Zealand’. Prof. Flynn’s 100-level paper, ‘Basic Problems of Philosophy’ was on the books by the early 1970s. He taught POLS 101, as it later became, for over 30 years; when Politics graduates from that era reminisce about their studies, conversation inevitably turns to the ‘rite of passage’ of Prof. Flynn’s POLS 101 class.

In 1975 Dr G.A Wood was appointed to the department to bolster New Zealand politics, and he remained on staff until his retirement in 1997. By 1980, the Department had six staff and was teaching an increasing range of topics including comparative politics and area studies. Within a few years Political Studies moved to the Arts Building on Albany St (affectionately known as the Burns Building) which was built in 1969. The Department is still located there today. 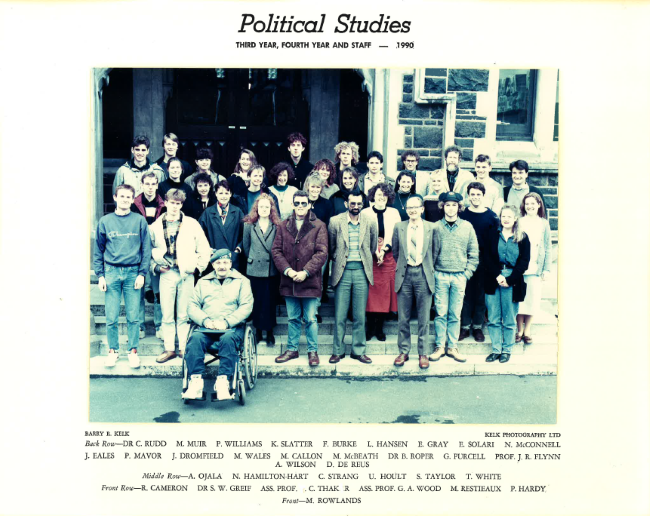 Dr Chris Rudd was appointed in 1987 and Dr Brian Roper, New Zealand politics expert, was appointed in 1990. The photo above was taken in 1990 and includes Dr Rudd (back row, top left), Dr Roper (back top, fourth from the right), Professor Flynn (to the right of Dr Roper) and Professor G. A. Wood (front row, third from the right). Later that year, the first woman was appointed to the Department, Dr Jindra Tichy, who was on staff until her retirement in 2004. After 1990, the department further expanded its offerings, including ‘Aspects of Feminist Theory’, first offered in 1991. In 1992, Dr Robert Patman joined the staff and within a few years both ‘International Relations’ and ‘Introduction to Asian Politics’ had been added as 100-level POLS papers. in 1997, Professor Jim Flynn stepped down Head of Department and Chair, after thirty years in that role.

Dr Chris Rudd became Head of Department in 1998 and Dr Janine Hayward was appointed that year to teach New Zealand politics. The department expanded considerably over the next 10 years in both the number of staff and areas of expertise. Many staff have contributed to the growth of the Department over the last twenty years, but here’s a brief overview of those recently or currently on staff. In 2002, Dr William Harris joined the Department with expertise in the Middle East, and Professor Philip Nel arrived in 2003 to teach IR. By 2005 the department had 13 staff, including Dr Najibullah Lafraie (who retired in 2015) and Dr James Headley, a Russian and EU politics expert appointed in 2002. Political theorist Dr Vicki Spencer was appointed in 2006 and Dr Bryce Edwards in 2007 in the field of New Zealand politics. In 2008 the Department changed its name to the Department of Politics: Te Tari Tōrangapū. Dr Carla Lam and Dr Lena Tan both joined the department in 2008, strengthening the political theory and international relations theory offerings. In 2010, Dr Nicholas Khoo was appointed to teach international relations and Chinese foreign Policy, and Dr Iati Iati joined the department with expertise in Pacific geo-politics.