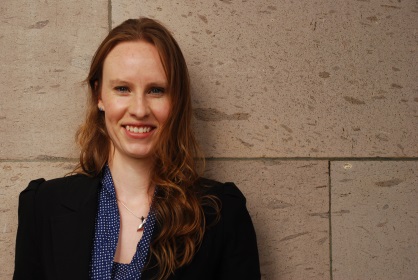 Long before most young people even knew what it meant, Gemma Cornelissen aspired to a career in diplomacy. Her diplomatic preparations began early, with a high school exchange to Japan, followed by studying international relations at Otago. During her studies, Gemma spent a semester on exchange in Amsterdam. “International student life in Amsterdam was wonderful fun,” she says. “I made great long-lasting friendships and was able to travel widely in Europe while contributing to my Otago degree.”

When nearing the end of her studies in politics, law and Japanese, the Politics staff were a major factor in deciding to stay on for postgraduate studies. “It’s a great department. I found the academic staff very supportive – they pointed out opportunities for me to tutor courses, attend conferences, conduct paid research and they supported my external job applications.”

While she continued to develop her passion for international relations, she also came to love political philosophy and decided this would be the focus of her Master of Arts. “Writing a thesis in political philosophy was a big challenge but ultimately a really satisfying and rewarding experience that added a lot to my skillset.”

After seven years of study, Gemma finally realised her dream and joined the Ministry of Foreign Affairs and Trade (MFAT). Her first job was on the ‘Japan desk’ in the North Asia Division in Wellington where she was involved in everything from preparing policy advice to organising ministerial visits to travelling to Tokyo to join the Embassy response to the 2011 earthquake and tsunami. In 2013, she was posted to Malaysia to work at the New Zealand High Commission in Kuala Lumpur where she has had the opportunity to work on almost every facet of New Zealand’s broad and long-standing diplomatic relationship with Malaysia. With her posting in KL coming to an end, the next leg of Gemma’s global adventure will soon bring her back to New Zealand for a role at MFAT’s head office.

“Studying politics at Otago was a simple choice. The skills you learn - research, analysis, writing - are very relevant to a wide range of possible careers anywhere in the world. Give it a try.”