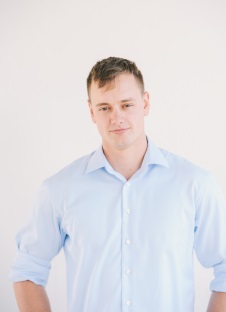 Study Politics at Otago and four years out you could be the Assistant Director Defence Excellence (Innovation) with the New Zealand Defence Force. Who even knew that was a job? Certainly not Tim Jones, but that’s exactly the role to which he has recently been appointed.

In 2010, Tim moved south from Hamilton to study at Otago, on the advice of family and friends. Through previous history studies at school, he had become interested in politics and was keen to take advantage of the wide range of international relations papers at Otago. He had no idea what the future might hold career-wise and politics seemed to offer a wide range of options. “Don't expect a Politics degree to take you along a straight simple career path,” says Tim. “I vividly remember a lecturer in my first year telling the class that in 10 years we will probably be working in a job we didn't even know existed. 7 years on she turned out to be absolutely correct. I never thought I would end up where I am now but it just demonstrates the flexibility of a Politics degree.”

“Politics is really great because you simply don't know where it will take you. Politics at Otago not only gives you a sound understanding of the topic but helps develop your critical-thinking and assessment skills, something that is in high demand from employers. It teaches you how to take in the facts, come to a conclusion, present your ideas and then adapt your ideas based on the feedback you receive, which is a highly valued skill in the workplace. Politics also has so many different areas of specialisation so it fits perfectly alongside other degrees as well as offering you a wide range of postgrad qualifications to enter.”

While at Otago, Tim also threw himself into the lifestyle for which it is renowned. He played numerous sports, including rugby, fencing, Brazilian Ju-Jitsu and kick boxing, as well as joining the tramping club and Army Reserves.

His time with the Army Reserves was the beginning of an interesting career with the New Zealand Defence Force. He has worked with the Army's Directorate of Strategy Development and most recently was the Innovation Manager for the Army where he was in charge of running the NZ Army Innovation Programme. In his current role as Assistant Director Defence Excellence (Innovation), he is responsible for Innovation across the Defence Force. This involves leading the deployment of NZDF Innovation Programmes to enhance the capabilities of the NZDF and support the development of a NZDF culture of excellence, continuous improvement and innovation.

And it all began at Otago. “Otago is great because you will make friends for life, you will often run into Otago alumni and you have this great shared experience, even if they were there years before you. I think that is something unique to Otago and you don't really appreciate the value of it until you leave.”