Sam Hughes, Office of the Auditor-General 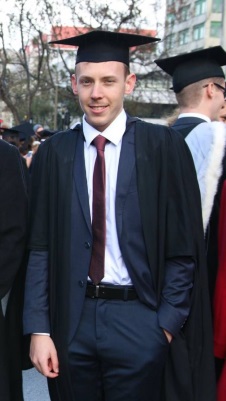 Sam’s family has always been interested in Politics and he was no different, especially after attending a protest against the Iraq war in 2003. During the protest a member of the public, who opposed the protest, grabbed the megaphone and start yelling obscenities at the crowd. While this might be off putting to some, it only made Sam more interested!

Sam grew up in the Taranaki and Hamilton, he spent his last year of high school in Canterbury, but it was the student centred lifestyle and it proximity to a lot of cool places in the great outdoors that drew him to Otago.

His Master of Politics degree helped to prepared him for his current job as the Assistance Performance Auditor with the Office of the Auditor General. Not sure what that means, we will let Sam explain:

“The Office of the Auditor General is one of three independent offices of parliament, and the work I do for the office involves helping to produce performance audits on the behalf of the Auditor General for parliament and the public at-large. These audits are reasonably long, require citations/references to primary sources like documents, interviews, focus groups, and hence the way in which they are produced can be similar to that of a dissertation. With these audits we get to focus on a lot of interesting topics like freshwater management, and our findings are tabled in parliament and presented to select committees”

When asked what advice he would give to anyone who is thinking about studying Politics at Otago Sam’s response is - Do it!

“Otago has the only dedicated politics department in New Zealand, and therefore you've got access to staff members who are passionate about many different aspects of politics (e.g. treaty, environment, international relations, political philosophy etc.). Also make the most of your time with the lecturers, all of which are approachable and interested in what you have to say, and get to know other students in the department as well.”