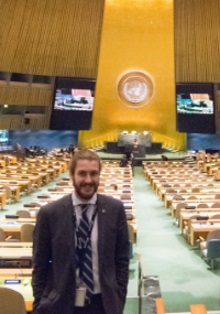 As a young Otago politics student interested in international affairs the United Nations had always captured my imagination. Since its inception following the end of the Second World War the UN has been the premier international organization dealing with global peace and security, and aspires to foster international cooperation through multilateralism. It was my interest in human rights and peacebuilding that first led me to study politics; however, sitting in a cold student flat in North Dunedin, the possibility of working with the UN had always seemed a very, very remote dream.

Browsing the internet one chilly August evening, however, I came across an advert calling for applications to intern with New Zealand Permanent Mission to the UN in New York. Having recently completed my Bachelor of Arts with Politics and, in need of a next step, it seemed like a good idea to apply. Suddenly realising that the deadline was that same evening, I hastily updated my CV, put together a cover letter and sent in an application. A few weeks later, following an interview over the phone, to my great excitement I received an email offering me an internship starting in March 2017.

The reality that I was going to be interning in New York and at the UN took a long time to sink in, and I was still pinching myself on my first day at the New Zealand Mission in midtown Manhattan. The New Zealand Permanent Mission to the UN is a part of the Ministry of Foreign Affairs and Trade, and, broadly speaking, is responsible for promoting New Zealand’s interests at the United Nations. When I started at the Mission, New Zealand had recently completed a two-year term on the Security Council and thus the office was in the process of down-scaling after an incredibly busy couple of years, with several staff members finishing their postings and heading back to Wellington. There were around 20 permanent staff members at the Mission while I was there, each specializing in a different area of the UN, including human rights, development and humanitarian issues, peace and security, disarmament, and legal and political affairs. Despite being in the heart of the New York City, I found that the Mission had a distinctly Kiwi feel about it, due in part to the friendly and relaxed attitudes of everyone in office, the jars of marmite in the kitchen, and the daily ritual of completing the quiz in the Dominion Post.

In general, the role of an intern is to assist the permanent staff members in carrying out their duties, which might include attending meetings at the UN and taking notes, summarizing reports, undertaking various research assignments, and at times just making sure New Zealand is represented at a meeting. In doing this, interns have the opportunity to learn not only about the UN system but also about New Zealand’s foreign policy and our role at the UN. Despite New Zealand’s size we play an important part in bridging the gap between smaller developing countries and the larger, more developed countries. It was fascinating to learn which countries New Zealand aligns itself with on various issues, and how New Zealand uses its position to push for a fairer and more just international system. Upon starting at the Mission new interns sit down with the intern coordinator and discuss what they are particularly interested in and what they want to get out of their internship. Depending on the needs of the permanent staff members and any major upcoming events or meetings, interns are assigned a mentor in a particular field to whom they are primarily responsible and learn from during their time at the Mission.

My personal experience at the Mission was incredibly varied and diverse. I spent two months following negotiations on budget and administration issues, including the financing of the UN’s peacekeeping operations, which gave me an amazing insight into the behind-the-scenes workings of the organization. Although many grand declarations and statements are made by leaders in the spotlight of the General Assembly, it is in the small negotiating rooms in the basement of the UN Headquarters that the real politics happens, and it was fascinating getting to know the negotiating tactics and various positions of different countries.

In line with my original interests, I followed several human rights conferences that took place during my time in New York. These most notably included the annual Permanent Forum for Indigenous Issues and the Conference of States Party to the Convention on the Rights of Persons with Disabilities. These were both incredibly interesting to be involved in, and a personal highlight was writing and delivering a statement on behalf of New Zealand at an event on Youth and Disabilities. Other human rights events I participated in included negotiations on Indigenous Participation at the UN and the first-ever session in the Security Council on Human Rights and Armed Conflict, chaired by US Ambassador Nikki Haley. It was at times immensely disheartening to see the level of resistance to some very basic notions of human rights that we take for granted, and incredibly concerning to witness first-hand the misrepresentations of the truth and even outright lies repeated by some state representatives. At the same time, however, I was inspired by the dedication, passion, eloquence and knowledge with which the defenders of human rights fought with, particularly the New Zealand delegates.

Aside from experiencing the workings of the UN first-hand, one of the most valuable takeaways from being in New York was the interpersonal connections made with other interns, UN staff, national delegates and members of NGOs. While the group of interns at the New Zealand Mission is constantly rotating, while I was there everyone blended into a supportive and tight-knit team that proved to be critical during the busier periods. I feel incredibly fortunate to have had the opportunity to get to know other interns from all over the world, and despite the endless coming and going of interns, I have come away from New York with many enduring friendships. The opportunity of talking to and getting to know official representatives from different countries was a similarly unique experience, and while, admittedly, some didn’t seem to have too much time for interns, the vast majority were only too keen to share their experience, expertise, and suggestions for future careers paths.

Spending five months living New York was an adventure in itself, and in a city with so much happening all the time, and with so many interns looking to make the most out of their time there, it was easy to find exciting things to do and exciting people to do them with. While the costs of living in New York are very high, the New Zealand Mission is one of the few Missions to offer a stipend to interns to help offset these expenses. While this isn’t quite enough to live off comfortably, I spent a few months working full time before heading over, and kept accommodation costs low by living in Brooklyn. I was also fortunate enough to receive financial support from local Lions and Rotary Clubs to help cover the cost of airfares and travel insurance, for which I was incredibly grateful. The New Zealand Mission aspires to recruit interns from a variety of different academic and social backgrounds (not just LLB/BA Pols graduates from Victoria, a running joke in the office) and so I would strongly encourage anyone who is interested to apply, regardless of academic studies or financial situation. Applications for New York are typically open in the middle of the year, however the New Zealand Permanent Missions to the UN in Geneva and Vienna also offer internships that are advertised on the MFAT website at various points of the year, which I’m certain are equally as interesting and rewarding as being in New York.

Regardless of the various criticisms the United Nations frequently receives, my time with the New Zealand Mission affirmed for me the vital role that the UN has in helping to make the world a safer and more peaceful place. Despite the seemingly petty squabbles and unnecessarily hard-line positions of some states, the greatest strength of the UN is the opportunity for dialogue and diplomacy that it facilitates where there would otherwise be none. For me, my time in New York opened my eyes to a host of different career paths I previously been oblivious to, both with MFAT or the UN, and I’m certain that the professional experience gained from my internship will help me on the job-hunt in the coming months.