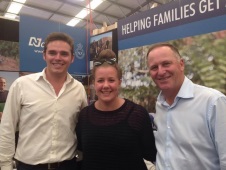 We’ve all seen the enthusiastic parliamentary debates on TV – but two University of Otago Politics students got to try it out for themselves for two days earlier this month. Stephanie-Anne Ross (LLB/BA) and Callum Findlater (BA) were selected to attend Youth Parliament, held every three years at Parliament.

MPs from around the country select one young person to work with them on local issues, attend events and finally, represent their electorate at Youth Parliament in Wellington. Stephanie-Anne was selected by Todd Barclay, MP for the Clutha-Southland electorate, and Callum by Sarah Dowie, MP for Invercargill.

Youth Parliament gives participants a two day, first-hand experience of how parliament operates by taking part in question time, a select committee, passing a mock bill and a general debate.

Stephanie-Anne was on the Justice and Electoral Select Committee where they debated the decriminalisation of recreational drugs. Callum served on the Transport and Industrial Relations committee, but found it was the debate on youth mental health and suicide that was most poignant and thought-provoking. 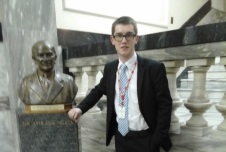 The two days were a great opportunity to meet like-minded people and get an insight to how parliament works. But the best part was rubbing shoulders with politicians and asking them the tough questions. The rally of anti-Chinese protestors claiming that factions of Chinese society were being harvested for their organs (for transplant) was an unexpected addition to their time in Wellington.

It was a challenging experience, but both Stephanie-Anne and Callum left feeling inspired to continue to pursue their political aspirations. Keep an eye out for these familiar faces in the parliamentary chamber in the not too distant future.