Politics student elected to Community Board 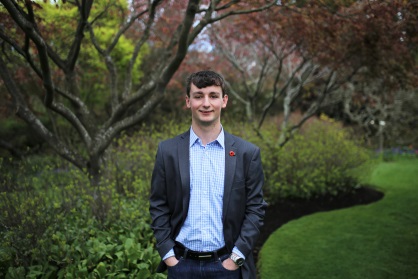 In the recent local body elections, Ryan Jones, currently studying towards a BA in Politics with a minor in Māori Studies, was elected to the West Harbour Community Board. An impressive achievement for a 19 year old.

His political aspirations began when he campaigned to prevent the downsizing of the Port Chalmers supermarket. This was followed by a second campaign where he became familiar with the local Community Board and its members. A conversation with former city councillor Andrew Noone, support from friends and family, and a nomination from the current Community Board Chair Steve Walker and close friend and former press gallery journalist Bill Southworth, and Ryan’s public service wheels were in motion!

Ryan now looks forward to delivering on his pledge of fresh input and fresh ideas. But a shopping list of projects is not enough – his overall goal is to revitalise and reinvent community boards as we know them.

With people at the heart of community boards, Ryan’s studies have set him up exceptionally well. “The most valuable aspect of studying Politics at Otago is the people,” says Ryan. “You can go to any university and study politics, but it is rare to have access to such a unique and diverse range of scholars and students.”

During his time with the Board, Ryan plans to complete a Master’s degree then pursue a career in the public service. Keep an eye on the career of this promising young public servant!