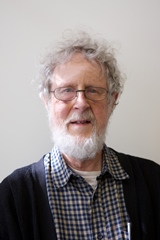 Professor Flynn was the foundation Chair in Political Studies when it separated from the History Department in 1967 and was Head of Department for the next 30 years.

His book What is Intelligence? Beyond the Flynn Effect (2007) offers a new theory of intelligence. Where have all the liberals gone? Race, class, and ideals in America (2008) and Beyond patriotism: From Truman to Obama (2012) are critiques of US politics and foreign policy. Fate & philosophy: A journey through life's great questions (2012) clarifies religion, ethics, science, and free will. The torchlight list: Around the world in 200 books (2010) analyzes works that delight and enlighten recent history and the modern world.

Otago awarded him the University's Gold Medal and an honorary Doctorate of Science. He is a Fellow of the Royal Society of New Zealand and recipient of its Aronui Medal.

In Conversation with Jim Flynn - Emeritus Professor Jim Flynn talks with Associate Professor Charles Pigden about the challenges of growing up in the 1940s/1950s and the influences of religion and racism during his upbringing. He goes on to talk about his academic career, beginning with a scholarship at the University of Chicago to study Politics and Philosophy.

Google books by title and the “Flynn Effect”