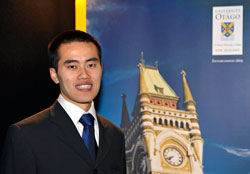 When Physiology student Mickey (Jui-Lin) Fan was in the final year of his undergraduate degree, he heard Dr Phil Ainslie (who would later become his supervisor) talk about research he had conducted near Base Camp Everest looking at the effect of high altitude on brain blood flow.

Mickey was fascinated, and for the first time he thought about the possibility of pursuing research-based postgraduate studies.

"I thought it would be an amazing experience," says Mickey. "So when I was offered an opportunity to conduct unique human experiments in the middle of the Himalayas, I just couldn't say no. It was literally my dream come true."

Mickey chose to research the role of brain blood flow in breathing control, a subject touched on in his undergraduate work but not yet clearly understood.

"Most importantly," says Mickey, "a reduction in brain blood flow causes an individual's breathing to become unstable, as seen in heart patients during their sleep."

Mickey's research involved manipulating healthy people's brain blood flow in different ways to better understand the relationship between brain blood flow and the breathing response. Repeating his sea-level experiments at high altitude, where even healthy people normally have unstable breathing patterns, helped him establish that an impaired blood flow control in the brain would result in greater instability in breathing during sleep.

Mickey's findings, which could help pave the way for an effective treatment of central (as opposed to obstructive) sleep apnoea, earned him the prestigious MacDiarmid Young Scientists of the Year Masters level award. Now Mickey is writing up his research for publication before heading offshore to begin a PhD.