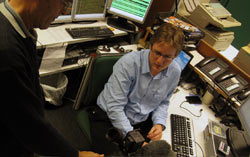 Max graduated from Otago last year with an MA in Media, Film and Communication, and early this year began working for TVNZ in Auckland as a cricket writer and content producer for its sports website.

For Max, that means getting paid to do what he loves. "It's the kind of thing if I wasn't writing about it, I would be ranting about it to people in bars anyway," he laughs.

He is also an assignments coordinator for TVNZ's news desk, following breaking news around the country, keeping in touch with emergency services as dramas unfold, and assigning cameras and reporters to cover the action.

"A busy night on the desk can be absolute chaos."

The unpredictable role balances perfectly with the more scheduled writing and updating of the website, where he indulges a passion for sport.

"We are just writing about what we see because we love it," he says of those behind the website, which won this year's Qantas Media Award for best sports site.

Both his roles at TVNZ seem a far cry from Max's research at Otago, looking at cinema-going in Dunedin in the early 20th century, when the city centre had a dozen popular theatres.

However, Max says the analytical and writing skills required to undertake the 40,000 word thesis have stood him in good stead in his new career.

It also showed his employers he could work independently to take a project from start to finish, through longs hours of research and writing.

Max says his supervisor at Otago, Professor Geoff Kearsley, provided brilliant support for his postgraduate work. "There were days when I would come in full of ideas and excited about the project, and the next day I would come in wanting to roll over and die. Geoff kept me steady and on the right track."

Max was born in Auckland but went to high school in Australia, moving back to New Zealand when he finished in 2002.

He followed his brother's footsteps to Otago and soon fell in love with Dunedin, eventually choosing his thesis topic as a tribute to the city.

"I felt I had taken so much in the six years I was there that I should give something back by writing about it."

Max says he always aspired to being a writer, but wasn't sure how he would make a career of it.

Now that he has, he wants to keep his options open for the future. One possibility is to move into sports reporting for One News. "There are not a lot of cricket writers in New Zealand, so the opportunity to move up is quite high I imagine."