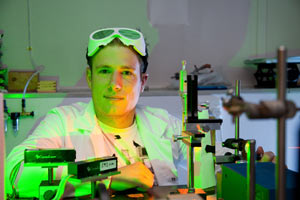 Chemistry doctoral candidate Samuel Lind had always been interested in how things work. His research into improving the electricity-generating properties of organic cells is, he says, “like engineering on a quantum/molecular scale.”

Sam’s research was recently honoured by the Royal Society of New Zealand with the award of its prestigious R H T Bates Scholarship. It’s an acknowledgment of the groundbreaking nature of his research and the potentially huge contribution it could make to the solar power industry.

Sam’s work focuses on the design of new materials for use in solar cells, including dye-sensitized solar cells in which molecules interact with traditional semiconductor materials and polymer-based cells.

“Organic solar cells generate electricity by using the excited electrons of molecules which have absorbed solar light,” explains Sam. “To optimise this process we must understand the properties of the molecules and how the excited electrons are utilised. Different molecules, with different chemical structures, have different properties regarding these two factors. So far there is little understanding of matching chemical structure with these properties.”

Sam’s research involves theoretical (using quantum mechanical calculations) and spectroscopic (using lasers) experiments to tie these properties together. He hopes his findings will enable desirable properties to be matched with a chemical structure. This will assist with the production of more efficient organic compounds for use in devices that generate solar power.

“With the growing demand for renewable energy and the drawbacks associated with wind and hydro electricity generation, solar power is a very desirable alternative. Currently silicon solar cells are too expensive. Organic cells are cheap to produce but lack the efficiency of silicon technology. With improved organic cell efficiency being the natural aim of this research, a breakthrough in this area would make this technology the obvious one to fill the need for future energy generation.”

Chemistry Head of Department Professor Lyall Hanton describes Sam as “remarkably imaginative in terms of the design of new molecules.”

“One of his ideas in 2008, while an Honours student, was greeted with some skepticism by collaborators in Australia who make the compounds and solar cells. They did not believe the molecular modifications Sam proposed would improve solar cell performance. Then in late 2008 a Japanese group reported a new molecule very similar in structure to that Sam had suggested. Of course it does improve performance, but somewhat amusingly these researchers don’t know why the new material is more effective.”

“As part of his PhD Sam is working closely with Australian researchers who make new materials. In addition to examining how to improve the molecules that act in solar cells Sam has started to develop models to help understand the whole solar cell mechanism of operation. This is being done in collaboration with a group at Imperial College in London who are the world leaders in experimental aspects of cell operation.”

“Sam’s approach is the first time a serious attempt has been made to understand the mechanisms that operate in these new generation, dye-sensitized and polymer solar cells.”

“His links with top Australian and UK groups means that the findings from his work will impact in a serious way on the design and improvements to these types of cells.”

Find out more about Chemistry at Otago, visit www.otago.ac.nz/chemistry.