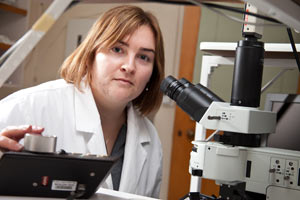 When Lisa Smith came to Dunedin in 2005 fresh out of Wellington’s St Mary's College she wasn’t sure what to expect. Fun, friends and study perhaps, but as an added bonus she has achieved a Master of Science (Anatomy) with distinction, a $100,000 grant to pursue her PhD research into Parkinson’s disease and a growing love for her work.

“Since fourth year, I have been particularly challenged academically and I’ve loved it,” Lisa says, “and so far my PhD is definitely challenging. I love the independence of it but there are also lots of people to talk to for help if I want to.”

Lisa was awarded the Neurological Foundation of New Zealand’s W & B Miller Scholarship in 2009. The scholarship pays her a stipend which is topped up by a University of Otago Postgraduate Scholarship to cover her fees.

The scholarships support her research into Parkinson’s disease, a disorder characterised by loss of the brain chemical dopamine, with resulting difficulties in movement.

“Replacement of dopamine using L-DOPA is the mainstay treatment for those with Parkinson’s,” Lisa says, “but in some cases this is associated with the development of abnormal movements called dyskinesias.”

“We hypothesise that these abnormal movements may be the result of an exaggerated learning mechanism where fluctuations of dopamine are working on overactive dopamine receptors.”

“We plan to determine the expression of dopamine receptors in normal brains and in an experimental model of Parkinson’s disease, measuring the effect of fluctuations in dopamine.”

“I hope this will lead to identification of targets for future pharmacological therapies to treat Parkinson's patients affected by dyskinesias.”

Lisa confesses to being “a bit of a geek at school” with a long interest in the brain and neurological disorders which alter the way the brain functions.

“Recently I've been particularly interested in genetics. The implications and applications, both scientific and ethical, of genetics fascinate me. This project allows me to integrate investigation of gene expression — mRNA expression — with probing into which mechanisms are altered by Parkinson's disease.”

Lisa was drawn to Otago for many reasons, not least because her grandmother also went there, and she has had no cause to regret her decision.

“I’ve had fantastic support with going to conferences and continuing my research education. The academic staff are encouraging as well as challenging and there are great opportunities to talk to others in different departments and disciplines about ideas and projects.”

Lisa sees clearly that this is all a springboard to a future that she hopes will take her full circle.

“I want to work overseas, either in the USA or Europe, in a postdoctoral position for a few years, before returning to New Zealand to use my research skills within the New Zealand neuroscience community.”

For information about research in Anatomy at the University of Otago, visit www.otago.ac.nz/anatomy