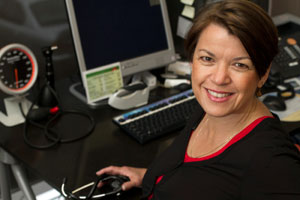 Right now, behind the scenes of Kiwi sporting achievement at the 2010 Commonwealth Games in Delhi, there’s a team of health workers keeping our athletes at their best.

At their helm is Aucklander Lynne Coleman, Health Team Leader for the New Zealand contingent. It’s not her first time in the role, having led the New Zealand Health Team at the 2008 Beijing Olympics and co-led the 2006 Melbourne Commonwealth Games team.

“We have 25 days in Delhi and you have to be switched on all the time,” says Lynne. “You’re with a group of driven people who have worked possibly ten years to get where they are, so you have to be at your best. The role is to support the athletes, the coaches and the sport. You’re a small part in a big machine.”

Lynne became part of that machine in 2001 when the New Zealand Olympic Committee’s Peter Pfitzinger asked if they could ‘card’ her as a designated Sports Doctor provider for the New Zealand Academy of Sport.

At the time she had only just received the results of her University of Otago Postgraduate Diploma in Sports Medicine, attained through distance learning from her Auckland base where she practices as a GP and sports doctor. She credits the Diploma for setting her firmly on the road toward assisting elite athletes.

Lynne had gained her medical degree and Diploma of Obstetrics at the University of Auckland in the 1980s. After 15 years as a GP and obstetrician she wanted a new challenge, and sports medicine offered the strongest temptation.

“I’ve always been keen on sports. I’d already been doing some sports medicine at the Millennium Institute of Sport and Health through my practice. I was also affiliated as a health and medical advisor with several sports associations. I have a passion for wellness and sport can have such a large part to play in people’s general well-being.”

“Otago’s Diploma course attracted me because it was more generic than Auckland University’s and looked more applicable to my practice. It was applicable to pure sports medicine and to general wellness. It really resonated with me.”

Lynne also liked the course’s multidisciplinary nature, allowing her to work with physiotherapists, exercise scientists, podiatrists, and other health professionals.

“For the first six months I’d meet with the other Auckland people doing the course — I was the only doctor. It was good to be with the others and get their perspective on the topics.”

“It fitted into my work, as we mostly met on Saturday mornings. In fact it was wonderfully flexible for me which, being married with five children and a busy home life, was a huge plus.”

A couple of years after earning her diploma Lynne realised she wanted to combine sports medicine with her GP work, so in 2005 she joined the Medical Centre @ Apollo in Albany. She sits on the board as executive director for Primary Medical Centre Ltd that is responsible for the business.

On top of all that Lynne is medical director for Basketball New Zealand, Swimming New Zealand and Athletics New Zealand. She was Chef de Mission for the 2009 University Games in Belgrade and has travelled as team doctor for the Tall Ferns and the Black Ferns.

“I have many hats,” she says understatedly.

But at this moment she is wearing her Delhi hat – sorting rosters, dealing with team dynamics and caring for the athletes.

“My role is certainly not to do it all but, like any woman, I like to know the work is being done.”