East and west meet in Heidelberg 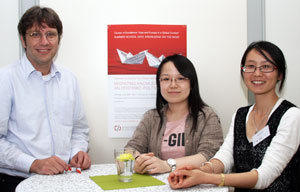 Languages and Cultures PhD student Yumin Ao appears to accumulate academic experiences the way some of us would like to collect works of art — prolifically, enjoyably and wisely.

Her recent attendance at Heidelberg University’s Summer School 2010 – ‘Knowledge on the Move’ is a case in point.

“I learned about the Summer School when looking at Heidelberg University’s website. I happened to be giving two papers in Europe around the same time, one at the Third International Conference on Philology, Literature and Linguistics in Athens, and the other at the 18th Biennial Conference of the European Association of Chinese Studies in Riga, Latvia, so it was easy to organise a trip to Germany to attend the Summer School.”

Hosted by the Cluster of Excellence ‘Asia and Europe in a Global Context’ the Summer School was concerned with different perspectives on encounters between European and Asian knowledge. As her own research interests are traditional trans-cultural studies as well as Chinese drama and Chinese Art History, Yumin was naturally drawn to attend.

“Thirty young scholars attended from 15 countries, such as Austria, China, Britain, France, India, Japan and Poland,” Yumin says. “This diversity led to much discussion and debate, and new ideas emerged on many aspects of Asian and European culture.”

“I discovered potential joint projects that I could collaborate on with other participants in the future. The inspiring lectures were delivered by distinguished speakers from diverse disciplines.”

Yumin’s Heidelberg experience adds another layer to an academic career already notable for its depth and variety.

So keen was Otago to attract Yumin that it offered her a Postgraduate Scholarship in 2007. She also won a Ministry of Education-funded New Zealand Postgraduate Study Abroad Award in 2008. Last year she was a junior visiting scholar at the Taiwanese Academia Sinica.

Yumin chose the University of Otago as the base for her PhD studies, “because it is research-intensive and a top-ranked university for research quality. The scholarship has enabled me to remain focussed on my doctoral work, have good supervisors, and be free from financial constraints. My past academic experience has been valued here.”