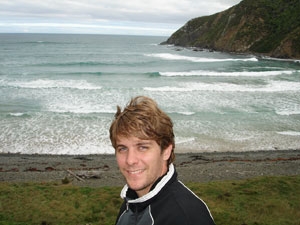 Working in adventure tourism means your days are spent smiling, being helpful and oozing confidence no matter what.

What drew Brazilian PhD candidate Sandro Carnicelli Filho to Otago’s Department of Tourism is a fascination for what goes on behind the smiles.

At the end of 2007 Sandro applied for and received a University of Otago scholarship to undertake a PhD examining “the emotional labour of rafting guides”.

“It's mainly a sociological theory that tries to understand how workers manage their emotions in face-to-face or voice-to-voice interactions with clients,” Sandro says. “I spent eight weeks in Queenstown, the adventure capital of the world, observing and interviewing rafting guides; people who have not just the responsibility of taking care of clients on the river, but also entertaining them, smiling and making them happy even when their own personal feelings are different.”

Sandro says, “Otago is a great university with heaps of opportunities for PhD students, from the chance to deliver tutorials to the financial support for research and conferences. The staff in my department are well known in the academic world, and my supervisors are fantastic and give me all the direction I need.”

In future Sandro intends pursuing his interests in adventure and sport tourism while also aiming for an academic career. He sees his PhD as a process in which he is learning not just about his own research but also about academic life.

Sandro found Dunedin’s cool climate took a bit of getting used to, and while the language barrier has been challenging at times he probably shouldn’t feel too bad about the gaps in his English, being fluent in Portuguese, Spanish and Italian.

Being close to Queenstown was also a great attraction. “There I was able to investigate and understand questions that intrigue me. There’s no better place in the world to study adventure tourism.”