Glimpse into the past earns PhD student spotlight 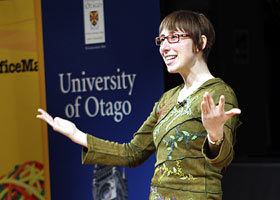 Giving people a glimpse into an amazingly different 16th century world is what PhD candidate Carol Wyvill says won her the University of Otago 2010 Three Minute Thesis Competition and saw her compete in the inaugural Australasian finals.

At the suggestion of one of her supervisors, Carol undertook the “daunting but fantastic” task of turning the thesis that took her four years and four months to research and write into a three minute presentation with the only prop allowed being one overhead slide.

“Preparing your presentation forces you to think in a very, very clear way about your thesis and its bare essentials,” says Carol.

For her PhD Carol edited a section of a book published in 1534 by English monk John Fewterer, ‘The Myrrour or Glasse of Christes Passion’.

“Fewterer’s work was a translation of an even earlier Latin text,” explains Carol. “He had it printed right at the beginning of the English Reformation, as England was being turned upside down in this staggering revolution of the whole country’s religion. I was studying a small part of that; reading what they wrote, trying to see how they would have reacted to it. Just a few short years later printing such an orthodox Catholic text could have got him in to trouble.

Carol says listeners at Otago’s Three Minute Thesis event caught her enthusiasm for the topic. As a result of her win, Carole joined four other representatives from New Zealand universities at the inaugural trans-Tasman Three Minute Thesis challenge in September, alongside thirty odd Australians. Stage fright hit her, but a last minute wild card draw got Carol through into the finals.

“It was fun, and it’s nice for the department if people participate in such things,” Carol says. “The $2000 prize was nice, too.”

The 2011 University of Otago Three Minute Thesis competition will take place in August 2011. Entries are open to any currently-enrolled Otago student working on a thesis. To take a look at last year’s competition, visit www.otago.ac.nz/itunesu

For more information about postgraduate study in English at the University of Otago visit: Department of English