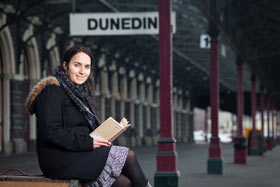 If you have any sense of wanderlust at all, talking to Anita Perkins about her research into the way people experience travel or mobility will get your feet twitching.

Anita is part way through her PhD doing a cultural analysis of mobility in travel texts, both literature and film, with a primary focus on the 1989/90-2010 period, but also considering earlier works like Georg Forster’s A Voyage Round the World (1777).

“Traditional sociological research tends to treat people as if they are static. This affects the way people in the social sciences and related disciplines do their studies. Mobilities researchers believe that social research needs to recognise that people are on the move.

“People are travelling, whether by choice or not; others may make a conscious decision not to move. In many New Zealand families, for example, some people may be on their OE, or on holiday, some family members may be from another country or part of a family in another country.

“Politically speaking 1989/90 was a time in which the world was changing and opening up to movement and travel as a way of life. The fall of the Berlin Wall, for example, marked the overcoming of an extended period of enforced immobility. If you think of the movie, Up In the Air, for example, it’s about being on the move as a way of life. I want to consider whether this is a good or bad thing.”

Anita says a lot of mobilities research is being conducted in disciplines such as geography and sociology but there has been little investigation of mobility in literature and film from a cultural perspective.

“The mobilities framework allows me to take movement and culture as it appears in writing and films into account.”

Dunedin is Anita’s home town, but she has had a lifelong interest in other cultures and can hold a conversation in several languages.

Her own travels began with a trip through the US with her parents at a young age. She went on school and university exchanges to Munich and Heidelberg respectively, and working stints in Japan — skiing in Hokkaido and teaching in Tokyo. Through her interest in Japanese culture she became the Otago steering committee representative for the Asia New Zealand Foundation’s Young Leader’s Network.

“I’ve also been accepted for a PhD Summer School on the theme of ‘Mobility in Modernity’ in Berlin in October. This is part of the International Association for the History of Transport, Traffic and Mobility’s conference ‘Transport and Mobility on Display’.”

“I did my Honours degree at Otago and spent three years out of University knowing I wanted to go back,” she says. “Otago’s a great uni! It has a good reputation, there are good facilities, I’ve got an office and the library is great. I’m in my home town but meeting people from around the world.”