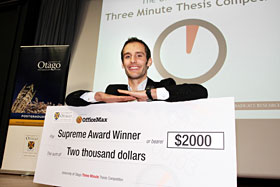 With a name like Jack Rocky-Jay Rivers he could be on the stage but, rather than topping the charts, this performer won the 2011 University of Otago Three Minute Thesis competition with his talk ’The future of medicinal marijuana’.

Jack received a $2000 study grant, and airfares and accommodation to represent Otago at the Australasian Three Minute Thesis Competition at the University of Western Australia in Perth where he made it through to the finals and also won the People’s Choice award.

The competition gives PhD students three minutes to explain the essence of their research with just a single powerpoint slide to refer to.

“I’ve always had an energetic speaking style,” says Jack, “so the competition seemed designed for me.”

Jack is in the final stages of his pharmacology PhD. His research concerns the potential for isolated marijuana compounds to minimise the effects of stroke by suppressing the immune system, thus reducing the inflammation that causes brain damage.

He thinks his speech won because he explained something complicated that is also a touchy political issue in a simple, level-headed argument.

“People are often passionately for or against the medical use of marijuana but I was straight down the line. I used 45 seconds to draw parallels between marijuana and opium. Both were used medicinally for thousands of years and both were made illegal for use as a social drug. But scientists didn’t give up opium. They developed morphine and codeine from it, drugs that offer pain relief and slow down intestinal function.”

“I’d never advocate marijuana smoking – but you don’t get high on the compound we use, so we can explore its potential to reduce inflammation in the brain when you have a stroke. Suppression of the immune system can stop that swelling just like putting ice on a sprain. My speech emphasised that we shouldn’t give up on marijuana’s medicinal potential.”

Jack says his oratory skills come from grabbing opportunities to speak in public.

“I’ve been entering speaking competitions since I was in Standard Three. This is the third time I’ve entered the Three Minute Thesis. I got to the finals the first time, the second time I added more detail and didn’t get that far. I learned you want less on the slide and more about the premise.”

Jack finds the competition fun but says there are lots of other reasons for entering.

“When you’re doing a PhD all roads lead to being a lecturer, and this competition helps you develop helpful skills. Throughout the heats the judges give you feedback; over a couple of years you take that on board. Awards always look good on a CV too.”

His final and most successful experiment, completed after the Otago competition, enabled Jack to strengthen his presentation for the Perth event.

“Before, I was only improving the level of brain damage by 18%; now, with a more potent compound, we’re seeing a 39% level of improvement.”

For more information about Pharmacology visit:

The Department of Pharmacology and Toxicology