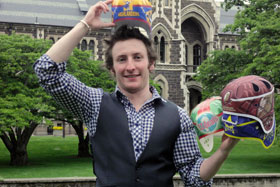 Entrepreneur in the making Clay Caird credits his recent win of the NBR Otago Audacious Business challenge as having helped kickstart his fledgling company’s trans-Tasman start-up.

The BCom graduate and current Master of Entrepreneurship student launched his company Creative Hype Ltd at the start of 2011. He entered the annual Otago-based awards after being encouraged to do so by Entrepreneurship programme guest lecturer and student business coach David Quinn.

Always intending to establish his own business venture – as the Entrepreneurship studies suggest – Clay found inspiration in the form of some old rugby headgear lying around at home.

He thought there would be potential in disposable or recyclable headgear made for sports fans but providing valuable exposure for the clubs and their sponsors. He commissioned a designer to help develop a blueprint that could be produced in light cardboard and, after the design was finalised, embarked on the hard task of selling his idea to rugby union, rugby league and NRL clubs.

Clay made a promotional visit in May to Australia, where he received positive indications of interest from most NRL clubs. Meetings with New Zealand clubs were similarly positive. His $25,000 Audacious prize money will enable him to invest in new samples and make a return marketing visit to Australia to continue building key relationships and drive through sales for next season.

After completing his Masters degree – which Clay says has helped his new venture and been relevant every step of the way, from intellectual property generation to cashflow planning – Clay intends to return to Australia to take his venture to the next level.

“I plan to spend the next six months in Melbourne, Brisbane, Sydney and, when I’m in New Zealand, Christchurch and Dunedin,” says the former St Andrews College half-back, who seems to have successfully traded rugby boots for rugby branding.