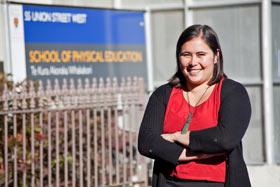 When Dr Anne-Marie Jackson (Ngāti Whātua, Ngāpuhi, Ngāti Wai and Ngāti Kahu o Whangaroa) embarked on her first university degree, she never gave a thought to the possibility of postgraduate study. Ten years later, she has secured a tenured position as a lecturer with the School of Physical Education where she started out as an undergraduate.

Growing up in Southland and attending boarding school in Invercargill, Anne-Marie enjoyed sports, so she applied for the School of Physical Education when it came time to consider tertiary education. Here she specialised in exercise and sport science, but when she applied to do an Honours year she decided to tackle something more socio-cultural: the orientation practices for new Physical Education students. This proved the beginning of her journey into policy and values-based research.

On completing her Bachelors degree Anne-Marie considered going to teach overseas or applying for the School of Medicine. Ultimately she opted to pursue a Masters degree, choosing to focus her thesis on the decision-making factors behind the school closures in Invercargill in the early 2000s.

“This meant focusing on New Zealand education policy and ideals such as egalitarianism, and how these fared against the prevailing norm of neo-liberalism and economic rationalisation,” explains Anne-Marie.

“It’s very multidisciplinary,” she explains. “The skills you learn can be applied to different areas, and you feel comfortable entering dialogue with a variety of disciplines.”

Anne-Marie’s applied thinking and methodological approach would ultimately prove useful in the doctoral research she then progressed to, but first she knew she had to find a topic she felt passionate about.

“I knew I wanted to do a Māori-related PhD from which the findings would be directly useful to people,” she recalls, “but that was all I knew!”

In November 2007 Anne-Marie attended a national fisheries hui. The hui was focused on building a community-based, nationwide network to sustainably manage customary fisheries. Various research topics emerged from the hui, and Anne-Marie selected one – the use of taiāpure (Māori fishing reserves granted by legislation) and rangatiratanga to manage fisheries – where she thought she could apply previous learnings, because it involved investigating governmental processes behind fisheries management and how these aligned with iwi-based mechanisms.

There was one small problem: “I knew nothing about fisheries and very little about environmental management!” A summer internship funded by Ngā Pae o Te Māramatanga enabled her to complete a literature review and assure herself she could commit to a three-year project in this field.

Her FRST-funded PhD involved forming a close working relationship with Kāti Huirapa ki Puketeraki hapū members at Karitāne, where a taiāpure is in place. Anne-Marie also had to present her findings to the Ngāi Tahu Iwi a Tau – a prospect which, as a northern iwi-member, she found more daunting than an international conference presentation.

Anne-Marie graduated in December 2011 and, having already taught in a variety of disciplines during her years of postgraduate study, was well-placed to secure a permanent position in Māori Physical Education and Health. She sees her appointment as one of the many ways the University is creating an environment that supports success for tauira Māori at both undergraduate and postgraduate levels.

While she wanted to work in an area that would directly benefit Māori, she acknowledges other Māori might not necessarily do so. But no matter what field they succeed in, she says, it’s still important for people to keep what they do in perspective.

“You might have a PhD, but if you’re on the marae washing dishes, you’re no different from anyone else,” she says.